The deadlift was done about 7 months after herniating my L5 and S1, Im proud of the fact i was able to overcome that and get back to decent numbers so fast.

Where You Train: Berea Barbell

Day Job: Im currently a full time student at Eastern Kentucky University. I train people only with the cube method and do alot of buy and resell type stuff to get by. I also make my parents pay for everything.

What Would Be Your Personal Theme Song:  NWO WOLF PACK theme music of course

What Got You Into Training/Competing:

I was a skinny fat “pud” as a kid, i basically had no muscle, a tiny frame and was just soft, i hated it so i started doing bench and curls in my basement. Later on I started playing football but figured out on my own that the coach was an idiot and i liked the lifting part alot more so i somehow talked my mom into driving me to the gym 3 times a week until i got my license. Luckily the gym I started out at was heavily influenced by powerlifting and hosted unsanctioned and USPF sanctioned meets pretty regularly. After my first meet, i was hooked.

Who Have Been Influential People in Your Training/Life:

I have more people that inspired me than influenced me. Im stubborn as shit and don’t really like taking advice or asking questions. Im the kind of guy that will take an hour to figure something out rather than take a minute and ask a question for the answer. But the people that have inspired me are the guys I grew up training around. Matt Johnson, Don Fields, Brian Siders have been there since early on, now that I’ve gotten stronger and around more major lifters I have to include my training partner Brandon Lilly. Some lifters that I love watching are Dan Green, Lilliebridge, Rubish, Klokov, etc. I really like well rounded lifters more so than guys just good at one lift.

What Are the Greatest Challenges You Have Faced In Training/Competing:

So far my greatest challenges have been injuries. I tend to strain my pec’s often which always sets my bench training back a bit but i believe i have fixed that problem. My biggest injury was about 1.5 years ago when i herniated both my L5 and S1, this left me without the use of the posterior portion of my leg for about 5 months. I couldnt even raise up on my toes because the nerve was pinched so bad. By the time I got the pain levels down to a tolerable level I started training again, just doing shallow leg presses, leg curls and band good mornings. I remember having to hitch a 275 sumo deadlift  shortly after i started training lower again haha.

How Do You Structure Your Training Going Into Competition:

I really like more drawn out cycles, im comfortable with 12 weeks. Im very anal about it so I like to have pretty much everything laid out ahead of time. I start by getting the timing of my squat and deadlift workouts laid out, starting at the competition date and going backwards. I prefer to gradually build into the meet, starting with volume high and working it down, ill end it with some supra maximal stuff with chain on squat to overload and almost burn me out. I know im ready when my last heavy squat day is a complete disaster. After that, ill take a lighter week and a week off. For deadlifts I like to stick with reps throughout most of it, I will set up the cycle to hit rep pr’s based off of what i want to do in the meet. For example, if i wanted to pull 700, i would shoot for 545×8 early on, 595-600×5 then 635×3, after than i may hit a single or two from matts to get a feel for the weight.

This is where I lack. Im usually too lazy to make anything so I’ll order out or go get something. I do try to pick the highest protein option or will order stuff with double or triple meat. To supplement for my lack of good eating I use a supplement called humapro which is a protein replacement type product.

What Upcoming Competitions Do You Have? What Are Your Goals:

Since i just switched back to raw from a short stint of geared lifting, I am building my base back up before deciding on a competition, I will however be returning to the platform in the summer of 2013 with a 1900+ total. Thats a statement, not a prediction. 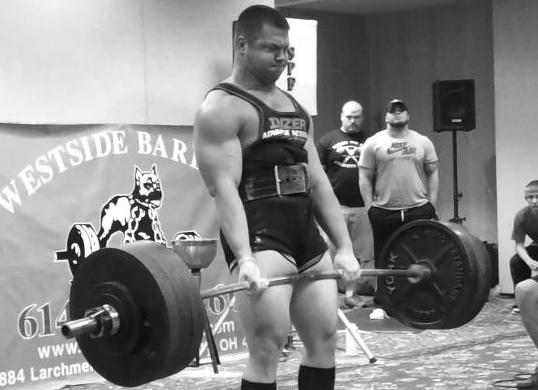 What Advice Do You Have For Someone New to Your Sport:

Stick to the basics, read everything you can and believe only about 25% of it. Find big strong dudes around you and EARN the right to ask them questions and learn from them. Push yourself a little harder than you think you should and eat a few bites after you want to quit. Learn about mobility work early on and always try to get your form just a little better.

I’d really like to thank Juggernaut Training Systems for having me. Id like to thank all of my training partners over the years at Pro-fitness, Guerilla squad, and now Berea Barbell. A huge thanks for my parents and mastercard for allowing them to go into great debt supporting me.

Get to Know Caitlyn Trout

Stapling Down the Variables

Ive had the luxury during my lifting career of training with, talking to and even training/assisting some of the best lifters in the world. Im …

Get To Know Squat?

Starting Monday January 21st, JTSstrength.com is brining you SQUAT WEEK! Six days dedicated to the king of all lifts, the squat. All this week we …

Tips for Your 1st Powerlifting Meet

Its finally meet day! You’re probably a nervous wreck. Your eye is on the prize and thats all you can think about.... Well unfortunately, to …

Back to the Future

Well it’s the last day of 2012 so I’m feeling all nostalgic and reflective. The past 365 days have been filled with excitement, stress and …

This weekend was probably the craziest, most exciting meet weekend that I’ve ever had thus far in my powerlifting career. The RUM 7 was featured …

Despite what you have been told the best deadlifters in the world pull very often, they are just intelligent enough to cycle their pulls. By …