Juggernaut is excited to grow in the sport of Olympic Weightlifting and bring you more helpful content to aid you in your journey to grow as coaches and athletes. Helping that growth, we have added 4 new Olympic Weightlifters to TeamJTS.

Meet Samantha Lower (formerly Turnbull), the 2x American Open Champion (2013 and 2005 and 3x Runner-Up) and World University Games athletes brings a wealth of experience to the table, having competed for 10 years already! Get to know more about Sam. 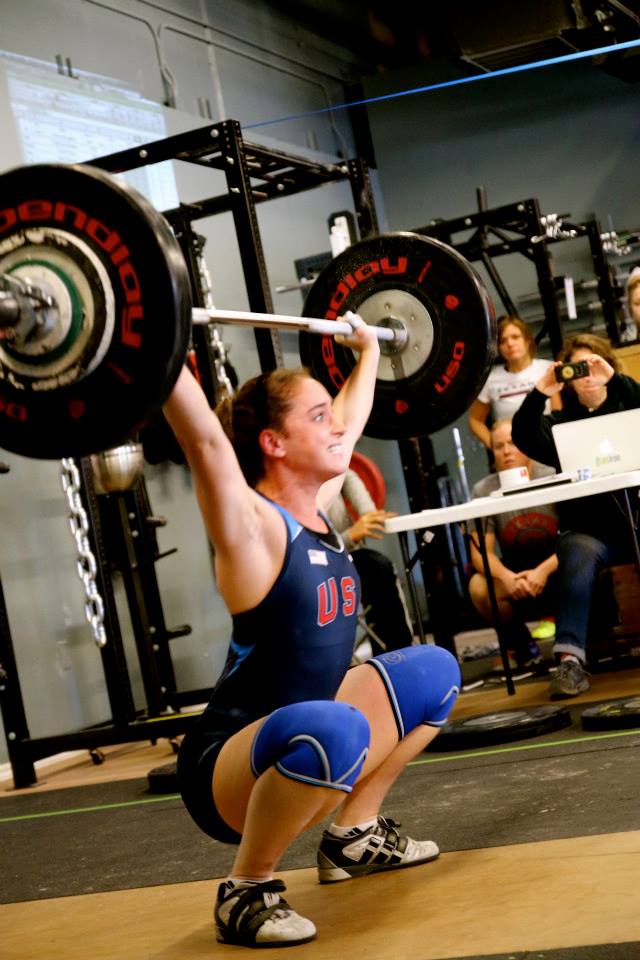 How did you get into competing in weightlifting?

In Florida, Weightlifting (Bench and C&J) is a high school sanctioned sport.  Having it as a class my freshman year, and knowing about it because of my brother’s older friends involved, and a persistent coach, I joined the team!  I competed all four years for high school and was a State Champion, and on my off season my high school coach was an Olympic Weightlifter who taught me to Snatch and began taking me to local meets, qualifying for National meets, and there qualifying for International Teams! So of course with how fun the competing and traveling was I continued on.

What advice would you give to someone starting out in weightlifting?

Patience. This sport does not happen overnight; I began training in 2002 and still break down my lifts in technique sessions.

What is going through your mind as you approach the bar?

Honestly, normally a song stuck in my head, or some random thought about someone I see in the crowd, or a voice I hear!  Training is the time to be thinking , throughout my years competing I’ve learned to relax and to “Trust my stuff”.

What are your thoughts about using the lifts for high reps? What considerations need to be made when training for reps?

If it were 6-8 years ago this would be a clear cut answer, but with the movements evolving outside the sport of weightlifting it’s not as easy.  First off, for the sport of CrossFit, high repetition, and high intensity weightlifting movements are essential for competition.  As for general population clientele looking to get into better shape and are using CrossFit as a fitness tool, I believe there are much better exercise choices that will produce a very similar if not exact training response at high intensity.  Looking at it from a Risk-Reward stand point, for most general population whether it be due to flexibility, strength, or coordination limitations, the Olympic lifts are much to complex to do at high repetitions at high intensity.

Obviously, the first thing you must be able to perform the lifts WELL for singles and doubles at low intensity.  Second, do the lifts from the hip or the hang.  This will take away the most difficult aspect of the pull (around the knees), and give the athlete much less to think about.  The shorter the bar path, the less that can go wrong!

What advice would you give to CrossFitters on how to best improve the lifts within the context of all the training they must do?

First, get strong in the main three positions of the pull (Hip, Hang, and Lift-Off).  Many CrossFitters that we see have a lot of trouble hitting proper positions, especially at a high percentage load.  Often times this isn’t because they don’t understand where they need to be, they just aren’t strong enough to get there.  Doing the lifts in these positions as a stand alone movement or as a part of complexes will help develop strength that will carry over to the full lifts.  Second, do the movements as often as possible.  I have talked to CrossFitters that go months without doing a Snatch and then it comes up in a workout!  We advise athletes to find a bar warm-up that reinforces the proper positions of the Snatch and Clean and Jerk and perform them everyday after their dynamic warm-up.

Colin Burns and Samanta Lower are two of the top weightlifters in the US today. Colin is a 94kg lifter based out of Louisville, KY …

Glitter here, you can thank Chad for that one! I'm pretty excited about my training right now and pleased with the progress we're making.  After …

What Is Your Favorite PR Song?

Samantha Lower - No way I can name just one, but I need upbeat, fun, singalong type music! Which normally results into Ke$ha. Sam Lower's training/karaoke …

What Is The Best Diet Tip You’ve Ever Received?

Nick Shaw - Don't cut carbs too early in a diet in order to save muscle/strength. Samantha Lower - Well before I got with Renaissance Periodization …

Iron Woman is a movement to celebrate strong women, to honor competitive female athletes and all that makes them amazing. We want to offer articles, …

What Are You Listening To?

What music gets you fired up? Everybody has something that helps light a fire inside them to push a little bit harder and heavier. Head …