I have to say that of any of the athletes that I work with, training the MMA athlete is probably my favorite. I think that it requires a coach to consider a broad range of attributes that must be accounted for. I also think it is fun as hell to watch guys go beat the shit out of each other. I love the intensity of the training close to fight time. I love the pressure that comes with the fact that if he isn’t fast enough, or strong enough, or have enough gas…. he might get his ass kicked, literally.

That being said, traditionally my stance has been that I don’t use CrossFit for MMA athletes. The main reason being that, MMA is great conditioning for MMA. What could possibly conditioning you better for your sport than your sport. Plus, you also acquire greater skill in that sport. The time that I have with the athlete should needs to be spent on developing qualities that are needed, but not developed by sport alone. I have a limited time with the athlete and they already have a high training load. If you think about how hard your olympic lifting, CrossFit, strongman, or powerlifting program is on you, then you can easily see how easy it could be to “over fill the sink” as Mike T talks about in his recovery article.

Months away from a fight, training volume and intensity outside of the gym is lower. Many of the “rules” I talked about in training an MMA athlete can be loosened or even changed. You can afford a much higher training volume and focus on building different qualities. Of course the hierarchy of the qualities will still remain the same. The other thing that you can do is have a little fun. After the last Bellator fight, I was supposed to start teaching Brent some olympic lifting. We didn’t mess with it leading up to the fight, but he sees us kicking shit and throwing it and getting pissed off, and then started watching YouTube videos, and now wants to learn. We figured that we would have a long enough lay off that we could just have some fun. 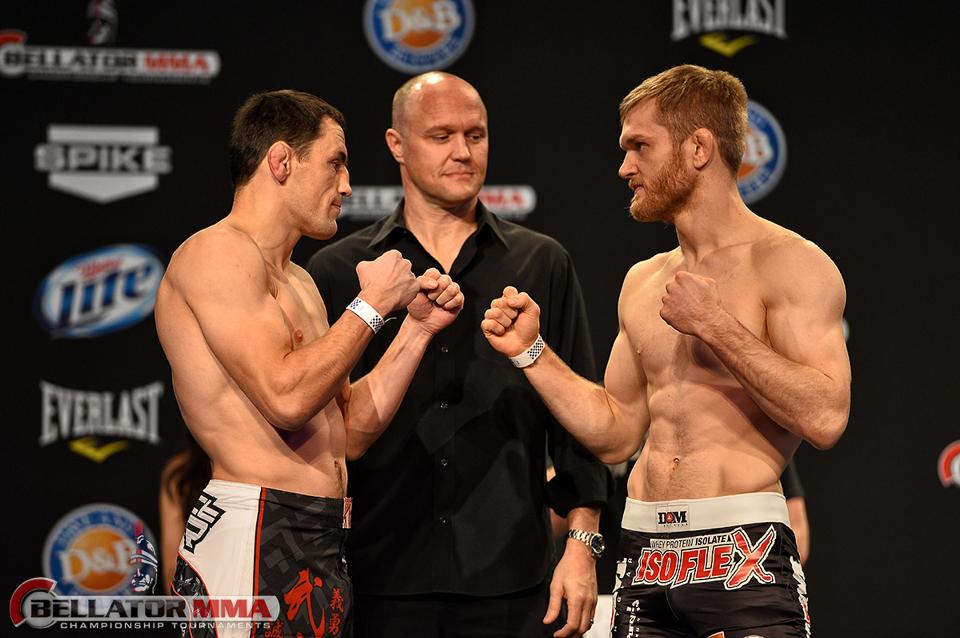 After breaking his hand during the fight, the olympic lifting plans were sorta derailed. Don’t get me wrong, he was back in the gym squatting with the safety squat bar like three days after the surgery, and shit is going to get real in the next Bellator tourny in the fall. I got on this whole line of thinking because Brent asked me if he could do a couple of the CrossFit classes during the week. Just to get some extra conditioning and have some fun.

I guess that I should also point out that, by adding CrossFit, I am not saying that a planned CrossFit program to build a CrossFit athlete doesn’t look remarkably similar to the program that we would be using for an MMA athlete. They both require many of the same qualities. The differences would be in the movements and the volume. With the MMA athlete I tend to throw away the inessential, or complicated movements in favor of more basic ones. In a real CrossFit program, the movements are the sport. I don’t have much of it in my gym, but I know for a fact that there are tons of gyms where people come in and do random shit everyday. They still work hard, but they are there for the fun of it.

I would also typically say that it is not the athletes job to have fun in the gym, that they should be in the gym to get better at their sport… and they should, but when the hell did I decide I needed to be so damn serious all the time.  Why have a program that allows some flexibility to be able to jump into the random workout or class once in a while. The other side is the allure of how crushing those workouts can be. Combat sport athletes tend to be the type of people who enjoy some punishment. Who am I to hate? It wasn’t that long ago when I started CrossFitting in the Marines that the only thing it was about was crushing the shit out of fools. Making people suffer. Building discipline with pain and suffering. It isn’t the best thing in the world for making you become a better athlete, but sometimes it can be refreshing to give yourself a nice beating.

So, here we go… a 9 week offseason program for MMA/Combat sport athletes with some room for CrossFit classes

You’ll notice that there are no percentages prescribed. Choose weights for the exercises that are difficult for the number of sets and reps. The weights should never be too heavy, and they should never be too light. Remember, the weights are completely irrelevant to you. You are not a powerlifter. The key to long term success, especially when there is alot of stress from other sources, is selecting appropriate weights for that day.

If you are awesome at all kinds of movements then by all means, mix it up and have some fun. Walk around on your hands, do muscle ups, whatever. It doesn’t really matter. If you aren’t, don’t try and get fancy. Stick to simple barbell complexes, KB stuff, basically… just don’t do anything terrible or ridiculous that would make me want to vomit. Incorporate pushing and pulling with upper and lower body into every workout and try to stick as close as possible to the time parameters. And eat a buch of food.

The Journey Back into CrossFit

CrossFit got me into the fitness/strength & conditioning world. I was introduced to it in the Marine Corps and loved it. Upon my EAS from …

Everybody is in a different place. Everybody has different needs. The trick of coaching athletes is to figure out what exactly it is that is …

I thought it would be good to answer some common questions on the Cube Method for Strongman. Some of these I answer in the book, …