Football is often called ‘the ultimate team game’ and it is a game filled with ultimate athletes. Every year players get bigger, stronger and faster and if you want to compete you need to not just keep pace with your competitors, you need to sprint past them. Take these 7 tips into account when looking at your training, or your athlete’s training and help them become the most powerful players possible…

There is one thing that no football player can be great without…PRACTICE! You can run the fastest 40, do the most bench reps, have the biggest power clean or do anything else great but if you aren’t mastering your craft in films, meetings and practice then you won’t be great. I’m not a football coach, so I’m not going to go into things too much here, but coming from a strength coach, know that the most important part of your training is on the field, not the weightroom.

To steal one of my favorite axioms from Coach Charlie Francis, ‘weights follow speed’ isn’t just a reference to the chronological order of your training but also priorities and hierarchy of stimulus. Football is a dynamic game and you have to be able to move quickly, regardless of position. True max speed sprinting is the most powerful stimulus for the athlete, putting upwards of 5x the athlete’s bodyweight force into each step. A great sprinting session, one where you are at or near PR times, can and should call for a reduction in either volume or intensity of lower body weights. The body has a finite amount of stress it can recover from and more doesn’t always mean better. Sprint training with full recoveries, should be part of all players programs and of course it will vary by position, but understand the speed AND strength gains it will yield and the high priority it should have in your training.

Mobility training is certainly a hot topic in the fitness and sports training community these days and there is a reason why, because it works! More than just stretching and mobilizing, a well designed movement program will improve your ability to express power efficiently, as well as keeping you healthy. Mobility/stability deficiencies are a sure fire way to inhibit your strength and speed, as well as eventually leading to injury. I know movement work is boring, I don’t like doing it, but suck it up and take 10-15 minutes per day for some breathing drills and self myofascial release and you will be moving and feeling better and your performance will reflect it.

4. Jumps and Throws for Maximum Power

Football is a power sport and if you want to succeed, you need to be able to generate great force in a small area. Jumps and throws (medicine balls, weights, shots, sandbags, etc) will force you to learn how to turn on as many motor units as possible in as short a time as possible to maximize velocity. Jumps aren’t just for the legs other, upper body jumps aka explosive pushup variations (clapping, onto boxes, off boxes, etc) will bring some more pop to your punch. Throws are a great tool to build explosive power through multiple planes of movement.

Whether we are referencing total work load or work within a single set, quality needs to be the aim. Doing a higher volume of sloppy work will only ingrain improper mechanics, leading to reduced performance and possibly injury. Within the context of a single set or effort, quality is of paramount importance of course, if something is worth doing, its worth doing well. Within a single set, quality has to be the focus. This is obvious when looking at sprints or jumps or throws, but make sure that you are extending that idea to lifting. Grinding out reps is not advisable for football players. Football is an explosive sport, train for it by moving explosively. Does this mean I’m advocating putting 135 on and knocking out some fast reps because 135 isn’t gonna cut it, but if you are grinding out slow reps, take 10 pounds off the bar and focus on moving it more forcefully with better technique. Submaximal training is the better way for athletes to improve performance within the context of an entire training plan.

One of the most common errors I see in the preparation of football players is training unnecessary energy systems or not giving attention to energy systems in the correct proportion. Football is an alactic-aerobic sport, meaning that it is played in the absence of lactic acid (due to the 3-7 second duration of plays) and relies on oxygen as the primary energy source (due to the 15-45 second rest periods between plays). Despite this people continue to do highly lactic activities like 300yd shuttles and gassers or go about developing aerobic capacity through long, slow work like running a mile which is an unnecessary pounding on the joints. Lactic based training will impede the athletes ability to develop maximum speed and power.

In training for football, focus first on developing alactic power-the ability to produce a high strength/speed/power output, because if you can’t run fast enough to cover someone, it wont matter how long you can sustain that speed. Second, develop alactic capacity, which is the ability to reproduce high level outputs with limited rest periods. In concert with the development of both of these characteristics, you must develop aerobic capacity to improve your ability to recover between high intensity bouts.

Learn more about conditioning for football in this video…

Food is your fuel and maximum performance requires quality fuel. Particularly for high school athletes who have limited dietary options at school, proper planning of meals is critical. The simplest rule of thumb is that if you can’t hunt it down and kill it, pull it out of the ground, pick it off a tree or fish it out of the sea-then you probably shouldn’t be eating it. Carbs though play a critical role for fueling the type of performance necessary for football and adding muscle, so you’ll probably need to add in some rice and pasta to the above rule. So often I have players tell me that they aren’t gaining weight and when asked how much they are eating, they always say “I eat so much” well it’s a simple issue, if you want to gain mass and aren’t, you need to eat more, however much you are eating obviously isn’t enough. Great performance isn’t going to happen with either an empty tank (not eating enough) or a tank full of crap (fast food, processed foods, etc).

Bonus. Choose Exercises with a High Degree of Transfer

So I couldn’t keep it to just 7 points, sue me. Transfer of training is something important to consider when training for everything. A big squat, bench and fast 40 are great but don’t ensure success on the field, otherwise NFL teams would just start signing Olympic medalists. You need to strategically choose exercises that will build special strength. Sled pushing and explosive pushing for linemen will carry over to on-field success much more than any traditional weightroom movement-once an adequate level of general preparation is reached. Special strength is king and developing it properly will take you from weightroom warrior to on the field star.

These seven guidelines are just a jumping off point for improved football performance but will serve as a great framework to keep your priorities straight and help you continually improve as an athlete and player. 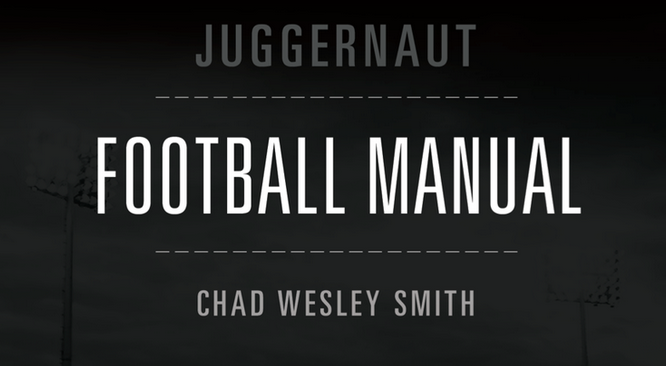 Chad Wesley Smith is the founder and head physical preparation coach at Juggernaut Training Systems. Chad has a diverse athletic background, winning two national championships in the shot put, setting the American Record in the squat (905 in the 308 class, raw w/ wraps) and most recently winning the 2012 North American Strongman championship, where he earned his pro card. In addition to his athletic exploits, Chad has helped over 50 athletes earn Division 1 athletic scholarships since 2009 and worked with many NFL Players and Olympians. Chad is the author of The Juggernaut Method and The Juggernaut Method 2.0 and The Juggernaut Football Manual.
Facebook, YouTube, Twitter

Lots of Juggernaut Training Systems’ followers and subscribers are individuals who work with high school/collegiate athletes, in the realm of strength training and conditioning. Some …

The Best of Chad Wesley Smith

Happy birthday to the Juggernaut himself, Chad Wesley Smith. In celebration of Chad's birthday, his ebook, The Juggernaut Method 2.0 is $10 off all weekend …

"You are being lied to." I remember seeing that quote on Jim Wendler’s website once referencing the abundant fads and fallacies of the fitness world. Perhaps more …

In my first article, I talked about work capacity as it related to conditioning.  Sticking with that theme, Part II of this series will be …

Chad Wesley Smith, author of The Juggernaut Football Manual gives you some more insight to help you better prepare football players to be the fastest, …