I’d like to preface this article by saying this:

I am currently playing college football. I just had my second shoulder labral repair surgery. I heard that you had gone through the same or similar surgery. What advice could you give me to get back to and ready for next season after having two shoulder surgeries? What would your training look like? Thanks

You obviously either have really bad luck or really bad genetics… or both.

There’s a ton of lineman that I come across with chronically shitty shoulders.  A lot of it has to do with not just their positions, but their builds.  Why?

As time as has moved forward, football has evolved.  When the game first started, the biggest players (offensive lineman) were usually around 240lbs.  Now, linemen are 100lbs more than that.

The ideal build for a lineman: tall, long arms and a thicker build.

Why?  Being tall stops players from being able to see the QB, it gives them more leverage and it’s intimidating as hell.  Having long arms gives them the ability to keep space between them and shorter, stockier, faster and stronger d-lineman.  By doing this, it enhances their height and leverage, making the combination of the two more effective.  Being thicker enhances their ability to absorb force, more cushin` for the pushin`, if you will.

Because height & long arms are a priority, natural thickness is hard to come by.  And in my time at Defranco’s I’ve evaluated more sizes and shapes than most.  Here are the basic builds that we all know: 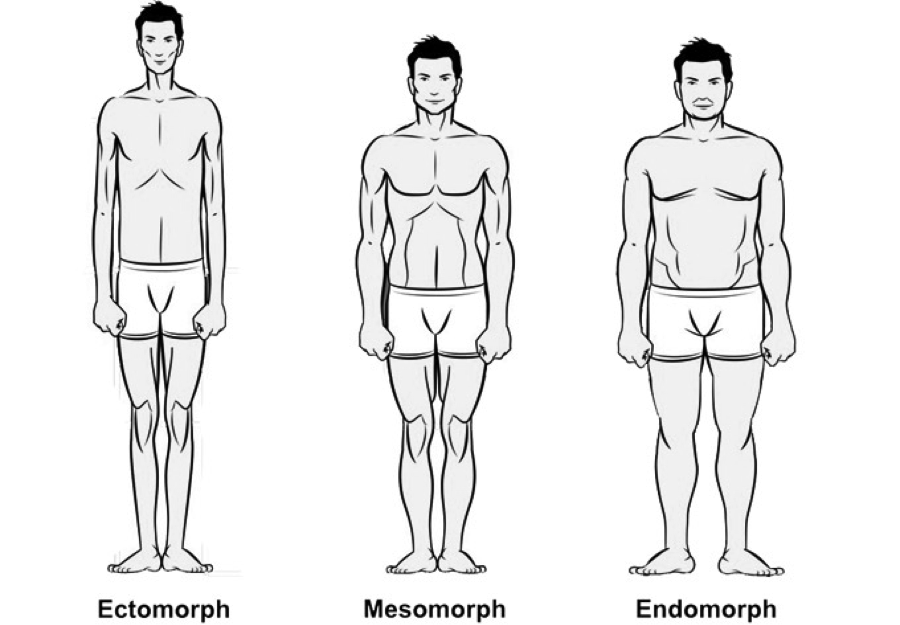 Succinctly put, you can be tall and skinny, short and thick or a combo of both.  And ideally, you want ecto height with an endo/meso build.  The ideal build for an O-lineman in today’s game is ecto height and limb length and endo thickness.  Unfortunately, most linemen I come across have ecto height & limb length have an endo stomach and if they’re lucky, they have a chest too.

Interestingly enough, most of the better high school linemen I come across tend to have more of an endo build.  Unfortunately, high level college and NFL standards believe their trial and error based research suggested that the ecto has more potential for development and success in the long run.

What I’ve noticed in my evaluations of the athletes at the gym is most ectomorphs that I’ve come across have a ton of laxity in their joints.  Laxity is looseness or instability in the joint.   It’s the same quality that big league pitchers possess that enables them to go through extreme ranges of motion with little acute trauma (considering the speed of movement and ROM).

Knowing a typical pitcher build, would you really put them up against a d-lineman?

Whose shoulders would hold up?

Now obviously, O-lineman now-a-days are not built like David Wells, however, they tend to have similar shoulders.   Because of the nature of their build, their shoulders/joints are capable of going through larger ranges of motion.

Why is this a problem for football but not for baseball?

In baseball, laxity enhances the sport because the sport requires excessive ROM in order to excel.  The greater the ROM, the more time the arm has for acceleration and deceleration, which decreases the risk of injury (to an extent).  Not to mention, the forces, comparably speaking, are way more spread out during a throw than they are for a lineman blocking.  Excessive laxity in lineman becomes problematic because all the forces are accumulating in the same spot, play after play.  The lineman initiates contact force in his hands, and the body’s job is to transfer the force optimally to minimize damage.

ForceàHands, wrists, elbows, shoulders, thorax, hips, knees, ankles, feet and then into the ground to create opposing forces to stop the opponent from reaching the QB.  Right?  That makes sense to me.

What can we do to prevent or treat this issue with lineman?

To understand and apply the answer, we must understand the variables.  The trauma involved with blocking occurs mostly to the posterior aspect of the shoulder. 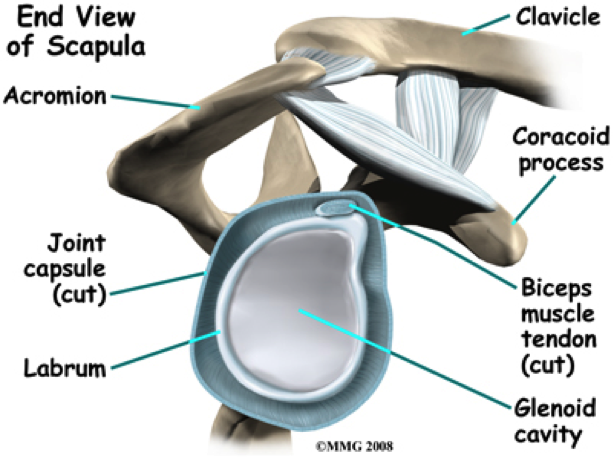 Now, what happens to the shoulder during blocking is the posterior labrum and capsule become stressed from continual & excessive stretching.  And because they’re able to stretch more, it makes for more direct force on a smaller surface area. 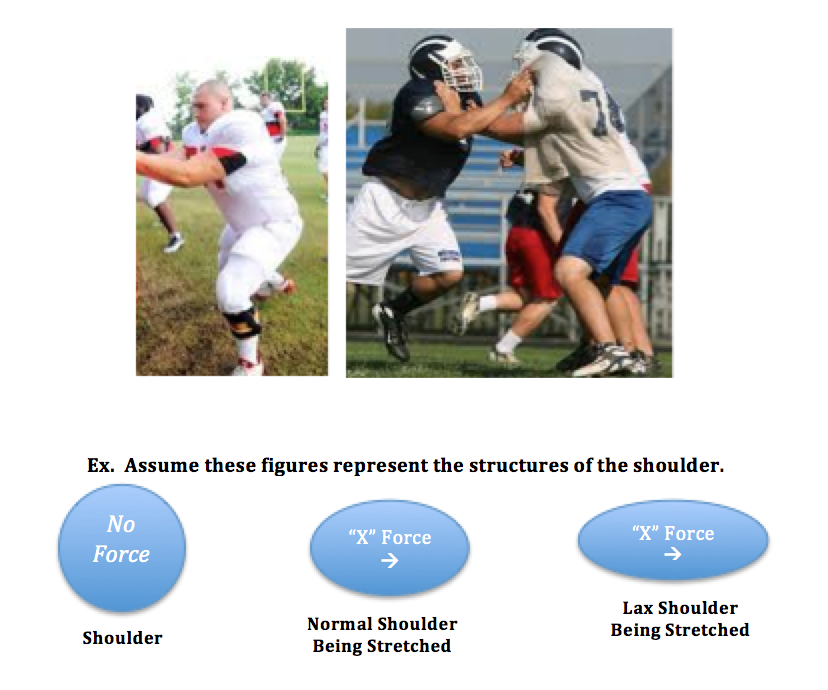 As you can see, there’s more acute pressure occurring in the lax shoulder.  Over time, this can become problematic for a few reasons:

As you can see, if there’s any room to give, at some point, something will give.

Majority of the time with lax shoulders, there’s an abundance of excessive stretching or subluxation that occurs.  Tears are usually a result of continual subluxations, which can lead to a dislocation.

When the shoulder moves excessively, though there may not be a tear, there is still trauma that occurs to the surrounding structures.   It’s not unusual for the humeral head to “bump” into surrounding muscles.  Doing this once or twice usually isn’t a big deal, the body is pretty resilient, doing this routinely, say, every day at practice or even once/week during games, or a few times a year over the course of a career can take a toll on the muscle.

This can cause the muscle to become dysfunctional or even cause a tear; particularly in muscles of the rotator cuff: supraspinatus, infraspinatus & teres minor.  Their responsibility is to stabilize the shoulder through various ranges of motion.  Any dysfunction in these muscles can compromise the structural integrity of the joint and inevitably lead to other detrimental issues.

Another thing the humeral head can disrupt during excessive ROM is nerve innervation.  As we know, nerves are pretty sensitive.  Any kind of tampering can lead to permanent damage.  Posterior subluxation can disrupt function of the suprascapular nerve, which will hinder the function of supraspinatus and infraspinatus.

And lastly, the shoulder can bump into other bones, which can lead to factures on the humeral head or the scapula.

How do we attempt prevent or fix these problems?

So if the problem is the humeral head posterior subluxation, then we need to strengthen muscles that aid in the preventing that movement; particularly muscles that aid in protraction & pushing: pec major/minor & serratus anterior.  However, it is paramount to understand what type of loading must be prepared for sport engagement.

Majority of forces linemen deal with are related to absorption (eccentric) and overcoming (isometric).  So, to train protractors to be able to handle eccentric forces and improve their ability to reverse the force would be beneficial.

Receiving Chest Pass and Throwing it

Essentially, if you’re a prototypical lineman (ectomorph), chances are that you’re going to be battling the drawbacks of laxity throughout your career.  Make sure you keep your pecs and serratus strong and stable to combat this issue.  I hope this was able to shed some light on your situation.

The latissimus dorsi (lat) is a very powerful muscle. Training this area involves common exercises such as rows, deadlift variations, pullups, etc. However, because most …

A Guide to Shoulder Pain-Part 1

By Ryan Brown One of the most often injured joints. These two joints, having such a large range of motion, are often worked through this range with …

In my first article, I talked about work capacity as it related to conditioning.  Sticking with that theme, Part II of this series will be …

As our days get shorter and the calendar drifts from summer to fall, it means that in the good old US of A, football is …

Every year more than 600,000 baseball players are treated for injuries caused by their sport. If we include softball, tennis, volleyball, quarterbacks, hand-ball, and track …