In part 1 of this 3 part series I will be discussing what I wish I knew about the squat when I first started lifting. Before I became a full blown Vanilla Gorilla, I was a little monkey with long, skinny femurs who couldn’t squat 135 lbs. as a high school freshman. As with any technical movement, but the squat especially, it is crucial to develop good habits from the beginning. Once you start getting strong in a movement and develop motor patterns, if you are not technically sound, it becomes MUCH harder to go back and fix the issues than just starting off correctly in the first place.

1) IT ALL STARTS WITH THE SET UP

How you set up for and unrack a heavy squat will largely determine your changes for success on the lift. As the saying goes, a chain is only as strong as the weakest link.

When somebody is first getting started squatting, the unrack, walkout, and upper body tightness will be extremely easy compared to learning how to actually squat down and back up. However, as an athlete gets stronger, setting up with heavy weight will become a much more challenging, and it can make or break a squat.

The most important things about a good set up are a stable bar position, extremely tight trunk, and a stable, efficient walk out. There are plenty of articles on our site that go into detail on these, but it is vital to create a proper set up early in the training years. The set up needs to become instinctual just like a squat. I take the same effort, focus, and concentration when preparing to squat the empty bar as I do 1,000 lbs.

The quickest way to miss a squat is to have an atom of doubt in your head. Hitting huge squats takes an incredible amount of confidence. The best way to build confidence is NEVER missing a training squat. Missing a squat (or any lift) in training puts a ceiling on what you think you are capable of. If you miss a lift, you lose certainty in your ability to hit that weight in a meet.

But when you smoke training weights, you have no mental barrier on what is possible. The squat is the most dangerous, adrenaline-fueled lift because things can go the worst in the squat. Major injuries are much more likely to occur in the squat than any other lift, and because of the danger factor, confidence is that much more important.

If you plant the seed of fear in your head with a certain weight, it is nearly impossible to overcome. 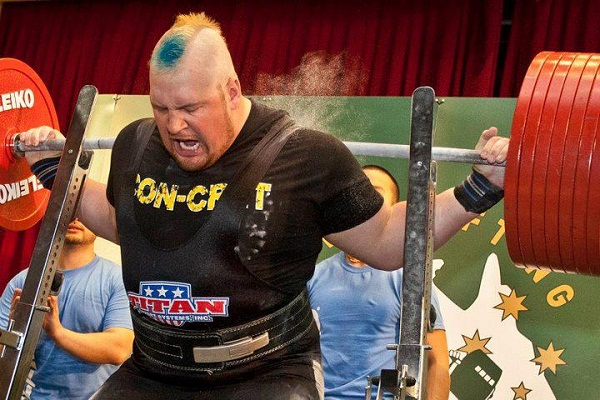 This is simple, but so often not practiced. In the USA, the majority of powerlifters did not learn the right way from the start. It may have been in a high school weight room with bro-spotted half squats or in a commercial gym doing less-than-deep knee bends to impress people.

I know I was guilty of learning like this. Yet when I look at my competitors in Europe, most of them learned to squat properly at a young age with proper depth – not the half squats you generally see over here. So when it comes time to prepare for a meet, the quickest way to get disappointed at your total is to have delusional training habits.

If you think you are a 500 lb. squatter, but you regularly squat several inches above parallel, it will take some serious ego swallowing to realize you might only be a 350 lb. squatter in a meet. It is very difficult mentally to go backwards like that in weight. The best way to avoid this is to start off by squatting to proper depth from the beginning, so you can focus on getting stronger, and not be forced to take steps backwards to achieve depth.

Instilling good habits early on in the training life of a strength athlete plays a tremendous role in how that athlete will develop. As with anything, it is much easier to do things right in the first place than to go back and correct things. When you have to stop, go backwards, and correct movements, someone else out there has been doing them properly early on, and is just focusing on getting stronger.

Wisdom for the Young Gorilla – Deadlift

The Top 8 Articles of November

1.  3 All-Time Strength Badasses You Need To Know About by Chad Wesley Smith If you're a strength athlete, you need to respect the history of …