With The 2014 CrossFit Games airing on ESPN, you may have noticed a increased prevalence in the amount of Strongman movements being used. I think every aspiring competitive exerciser should take note of this, as I don’t think this is a trend that is changing. From the local throw down to the CrossFit Games, Strongman-style movements will be a part of your competition.

I view Crossfit as the MMA of the fitness world. You need to be well versed in a variety of disciplines and skills, with no holes in your game to be a top-performing athlete. In MMA, most athletes will have a general coach and see specialists to develop certain aspects of their game (Jiu Jitsu, boxing, wrestling, diet, etc).

You see this happening more and more in Crossfit as well. People have their main coach, weightlifting coach, gymnastics coach, nutritionist, etc. Even if you don’t have a specific coach, these skills are still practiced regularly. Yet you see very little of this regarding strongman movements.  Or if they are programmed, in it is with little direction or thought to how to properly do the movements. Some people even neglect doing them at all, despite their prevalence in competitions (5 of 13 events at the Crossfit Games).

One of the main reasons is due to the lack of access to Strongman equipment. Of course, this can be remedied by checking out the Strongman Gym Directory.  The other reason many people neglect proper programming of Strongman movements is due to how Strongman is viewed. People see it as “just picking up stuff” – as a sport of brute force rather than one requiring substantial skill. It is not understood how technical some of the events are, and how being a bit more proficient in them will be beneficial for your performance in CrossFit competitions.

Now that we’ve discussed the “why” lets discuss the “what.” What movements should you focus on?

I break down what events to practice, based on with three main factors :

How to implement Strongman into your routine:

If this is not a possibility I recommend to train the specific events as such:

Log Press: First go read my previous article Log Press 101 for proper technique. After that, it can be used for either strength and conditioning. For strength, work up the same way you would in the clean & Jerk, utilizing sets of singles and triples to a max set. For conditioning, I recommend 8-10 rep sets, cleaning each rep. This can be thrown into any style of WOD as well.

Farmers & Yoke Walk: I recommend doing runs of 50-100ft of either implement EMOM for 5-10 minutes. This is a great way to add some conditioning to the movement as well. Do not load to a weight where you lose midline stability, especially with the yoke. You should be able to move at a fairly fast pace. Your footwork should be smooth.  If it’s not, you can tell that the weight is too heavy.

Sled Pull/Drags: Try this one. Do arm over arm pulls with a heavy sled for 60-100ft and push it back. Complete as many rounds as possible in 10 minutes. 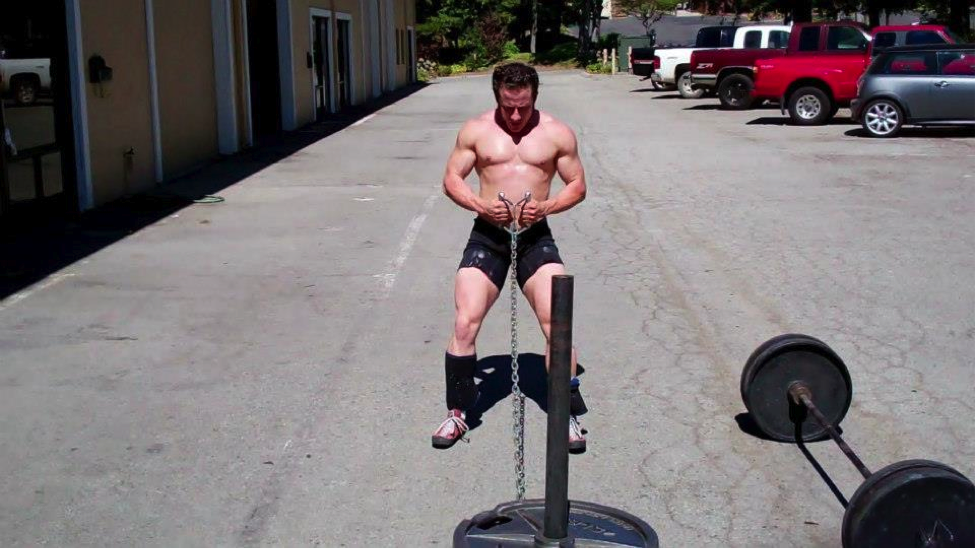 Atlas Stones: My advice is to learn how to load onto a platform or over a bar that is higher than your chest before practicing stone to shoulder. This will ensure you are using triple extension through your hips to pick up the stone, and not using your upper body/biceps which leads to a common injury with Atlas Stones: biceps tears. After you have mastered that, I think doing sets of 3 EMOM stone-to-shoulder is great, along with doing AMRAP for 30, 45, or 60 seconds. These principles can be implemented in just about any WOD as well.

Earlier I made mention of the risk/reward of movements, and I would like to quickly cover some of the biggest mistakes I see when people use Strongman movements in their training.

If you’re serious about being competitive in CrossFit, you need to become proficient in the Strongman movements.

The best way to do this is to find a Strongman gym within driving distance to learn from Strongman competitors, similar to how you’d seek our specific coaching for weightlifting.

Make sure to give extra practice the Strongman movements that are the most difficult to learn.

Be careful when programming Strongman movements, always keeping in mind the risk/benefit ratio.

Training For Everything by Chad Smith

Kalle Beck has been competing in Strongman since 2007 as a lightweight, with career highlights including 2012 California’s Strongest Man, 2012 Washington’s Strongest Apple, Numerous top 10 finishes at America’s Strongest Man and 6th place at the 2013 Arnold World Championships. He runs a website devoted to information on Strongman www.startingstrongman.com

Training is for Building, Not Testing

If you are a competitive athlete, what is the purpose of training? To improve your competition result. Training is not for showing off, it is not …

As I sit and write this article, we are 31 days out from the first weekend of Regionals. For the majority of CrossFit athletes, the …