It’s that time of year again.

Registration for the 2015 Open is upon us, and CrossFit athletes worldwide are gearing up to prove their fitness. This article aims to provide strategies and suggestions for athletes of any level who are taking on the Open this year.

1) Train through the Open, not for the Open.

There are three categories of athlete competing in the Open:

– You’re a serious contender for the Games. If this is the case, you’re already going to Regionals, barring a fluke, which is out of your control anyway. Your training focus needs to be on Regionals and qualifying for the Games, not on maximizing Open scores.

– You’re on the cusp. If the events are right for you, and you bring your A game to each one, you can qualify for Regionals. That’s a great accomplishment in and of itself, but if you’re coming into Regionals in the No. 20 spot, you’re not a Games athlete (Yes, I know about Cody Anderson. Stop). In this case, it’s best to foster a long-term view. Don’t take five weeks of your training and focus everything on maybe making it to Regionals at the expense of everything else.

– You’re not making it to Regionals, and you know it. There’s nothing wrong with being in this position, but it’s foolish to prioritize the Open above everything to come in 200th place instead of 220th. Keep getting stronger, keep developing skills, keep improving your aerobic capacity. Treat the Open as practice for next year and the years following.

Often, athletes get caught up in preparing for the tests of aerobic capacity the Open brings. Even ignoring the possibility of a more skill and strength intensive Open in 2015, this approach is a mistake for several reasons.

First, training with a heavy bias toward aerobic capacity pulls us away from training through the Open instead of for the Open. If you already have an aerobic capacity bias in your training to address a specific deficit, that’s one thing. But if you have been using a balanced program year round to make full spectrum improvement, it is unwise to move away from this in favor of a training plan geared toward five weeks of nonstop sport specific training.

Second, it is unwise to take for granted that just because the Open has had an aerobic capacity bias in previous years, it will again this year. 2014 included the heaviest weights yet seen in the Open, and with the introduction of the scaled division, there is a good chance that we’re going to see the classic tests of capacity, more heavy weights, and more skill components. Don’t train for the 2014 Open. 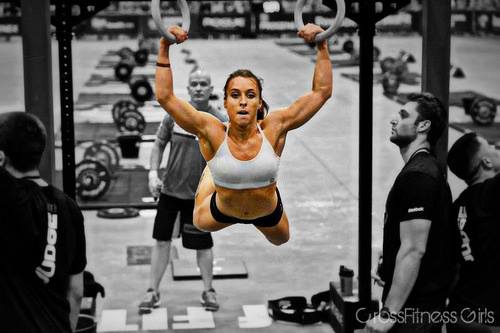 Barring an absolute fluke, or a situation where a marginally better score will massively improve your standing (to the point that it greatly increases your chance of getting to Regionals), there is no reason to perform an Open workout twice.

Remember that every time you perform an Open event, you are skipping something else. Maybe you won’t push your squats as hard so your legs stay fresh. Maybe you’ll substitute a completely different sport piece to do the Open workout again. Consider training economy, and consider whether moving up 10 spots in a field of thousands really means much to you.

With regard to planning your training week, the Open really throws a wrench in the works. Having a major component of your week unknown until Thursday evening makes organizing a challenge, but there are some things you can do to plan for the undetermined.

My athletes train five or six days a week, with Thursday as an off-day or as their lightest training day. They perform the Open event on Friday. These suggestions are built around that schedule, but can easily be modified to fit your own.

-Front load your week. Make Monday and Tuesday the highest volume training days, with a lighter day on Wednesday, and active recovery on Thursday. Friday should be based around the Open workout, making that the first item on the list followed with relatively lower stress work. Saturday should be similar in volume to Wednesday. I typically make Saturday our highest volume strength day. Sunday is off or active recovery.

-Think about which movements have a particularly deleterious effect on your preparedness, and do them on either Monday or Saturday. Are you prone to tearing after a lot of pullups? Put them on Saturday so that if they do tear, you have nearly a week to heal. Do muscle-ups leave you very sore? Train them Monday so that you’ll have until Friday to recover if they come up in that week’s event.

-Pay attention. Although it’s possible that a movement will be repeated in two events, it’s fairly unlikely, and therefore each week’s programming becomes easier to divine. If the first week had overhead squats, you can pretty safely assume the next four weeks will be without. Take this into account as you plan the next week’s training.

5) Make a plan, and prepare to be punched in the mouth.

Even assuming you perform the workout on Friday as suggested in the example above, you should plan to have some time the day before to play with the event and build a strategy.

After the announcement, spend some time playing with the movements involved at low volume, load, and intensity. Get an idea for how they feel, and how they influence each other. Think about how you’ll break sets, how long your rests will be, how you’ll organize your equipment, etc.

Then be ready for it to all go to hell.

Think about how things may go wrong, and how you can adjust for them. Prepare yourself to have a calm, forward-moving mindset even in the worst of circumstances. And when considering these possible scenarios, endeavor to make changes that allow you to stay as close to the original game plan as possible.

If you are an athlete who isn’t likely to go to Regionals this year, you may be tempted to write this practice off. I strongly recommend that you go through this process. It will make you that much better at it in subsequent years when you may be in the running.

Knowing and understanding movement standards is a necessary, but not sufficient condition for someone to be a good judge. A good judge should also:

-Be honest and unbiased

-Be clear in telling you why they no-repped you

-Stay out of your way to the extent possible

-Be aware of their surroundings, including equipment, camera placement, and other athletes

Despite how glaringly obvious this is, I can’t tell you how many times I’ve seen an athlete caught off guard in the middle of an event because they were unclear on a rule or standard. Review every last one, no matter how inane or mundane.

What are you expected to say to the camera before the clock starts? What angle should the workout be filmed from? Where does the bar need to be to be qualified as “overhead”? Knowing the answers to these questions is your responsibility. Not your judge’s. Not your coach’s. Yours, and yours alone. Do yourself a favor and take the judges course, thoroughly read the standards for every event, and if you have a question, email the Games support team and ask. The last thing you want is to miss out on a spot because of a stupid technicality or misunderstanding.

As you take all of these suggestions into account, don’t forget to have fun. It’s cliché, but it’s important. Every great CrossFit athlete I know genuinely loves the process of training. The Open, at it’s core, is about showing up to throw down with your friends. Have a blast.

Jacob Tsypkin is a CrossFit and weightlifting coach, and the co-owner of CrossFit Monterey and the Monterey Bay Barbell Club in Monterey, CA.

The CrossFit Games leaderboard is an underappreciated, underutilized thing. Though it is the bane of my existence during competitions – I feel like I spend half …

3 Reflections on the 2013 CrossFit Open

First off, I want to make the disclaimer that my "reflections on the CrossFit Open" are as a coach and not as an athlete. I …

A System For Developing Competitive CrossFitters, Part I: A (Relatively) Simple Analysis of a Complex Problem

For a long time, I thought of programming as a highly logical process, almost mathematical. If I could just dial in the volume and the …