1. Know When To Compete

Trying to figure out when to sign up for your first weightlifting competition can be a confusing thing. Many are faced with the unknown and begin to question their abilities. Often times, the inner voice says things like, “I’m not ready. I’ll embarrass myself. I don’t know how a weightlifting competition is run.” Soothe the inner voice by understanding a few simple concepts. The only way to improve at something is to actually do it. When someone decides to start CrossFit or weightlifting, they understand that they must workout multiple times per week to improve. The more often someone practices, the better the practiced skills become.

Competing is no different. It’s a skill. Once a lifter can do both lifts from the floor with confidence, then it’s time to register for the competition. If someone waits until they “think” they’re ready, then they’ll never be ready. There will be no perfect time for someone to lift in their first competition. There is always an ideal time, but no such thing as the perfect time. As long as you practice and train the way you want to compete, there is no reason to be afraid of competition.

Just because it’s a lifter’s first competition doesn’t mean that they’ll be exempt from knowing the rules. As many know, weightlifting is a very detail-oriented sport. The rules of weightlifting are no different. Make sure you are familiar with the rules BEFORE the competition. The more a lifter understands the rules of competing, the more confident they are likely to be in the new environment.
Although there are a lot of rules and regulations enforced by USA Weightlifting, there are a few important ones that a beginner should understand. If a lifter is scheduled to lift at 11:00 a.m., the lifter must show up at 9:00 a.m. to weigh in. As a first time competitor in weightlifting, DO NOT TRY TO GAIN OR LOSE WEIGHT! This can cause a lot of added stress that is unnecessary for a first time lifter. Refer to fellow JTS athlete Colin Burns’ article.
During weigh-ins, the lifter will need to tell the official what their first attempt in the snatch will be and what their first attempt in the clean and jerk will be.
In competition, a lifter will get three attempts in the snatch and three attempts in the clean and jerk. The lifter’s best snatch and best clean and jerk comprise a lifter’s total. If a lifter should fail all three attempts in either, then their total will be 0. There will be warm-up platforms set up at the competition site along with a competition platform. The bar on the competition platform will never go down in weight. Meaning that once the bar has been changed from 63kg to 64kg, then no lifter will be able to attempt 63kg for that lift. This is why counting and coaching is extremely important. For more information on counting attempts, check out this article.
Once a lifter’s name is called, he or she has 1 minute to attempt the weight on the bar. If the minute passes and the lifter has not made an attempt to lift the weight, then it is considered a failed attempt.
One of the biggest mistakes that beginner lifters make is not waiting for the down signal. When a lifter stands up with a snatch or recovers from a clean and jerk, they must hold the bar overhead until the center judge verbally says “down” or the lifter hears a buzzer.
Although there are a lot of rules and regulations, stress can be eased if a lifter and his/her coach do a mock competition prior to actually competing. For more information, visit http://www.iwf.net/downloads/?did=169.

Although attire is technically part of the rules, it deserves its own category. For my first competition, I was extremely nervous because I had no idea what I was doing. I could barely do the lifts from the floor and I definitely knew nothing about the rules. Someone informed me that I should wear a singlet, but I didn’t want to buy one if I was never going to compete again. The only thing I knew that semi-resembled a singlet was a swimsuit. I competed at my first competition in Vibram FiveFinger Shoes, a race swimsuit and spandex. I looked ridiculous to say the least. 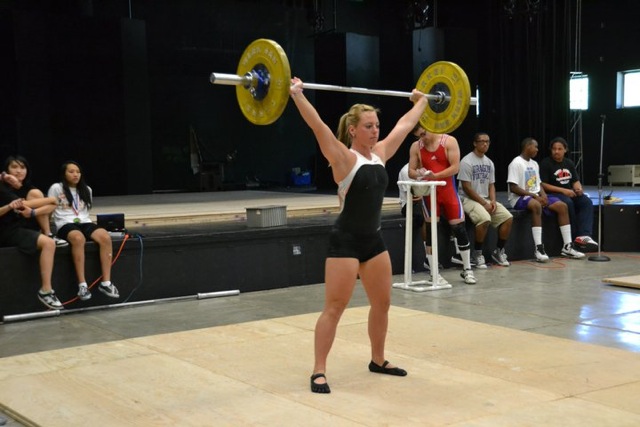 To avoid stares, a punch to the ego, and lack of confidence, I recommend purchasing a singlet. Asics sells singlets for $20. When a lifter decides to continue competing, then they can look into more expensive singlets that are made specifically for weightlifting. If a lifter absolutely cannot afford the $20 singlet, then most local competition judges will allow a lifter to wear a tightly fitted T-shirt and spandex during their first competition. However, it will be expected that the lifter has a singlet for any subsequent competitions. Weightlifting shoes are also preferred. If a lifter hasn’t been wearing weightlifting shoes to train, then it isn’t recommended to try them for the first time in competition. Even if a lifter decides that they don’t want to compete in the future, they should still be training in weightlifting shoes. Here’s what a weightlifting shoe looks like. Basically, it has a higher heel with a hard, flat bottom. This allows force put into the platform to be exerted directly into the lift, rather than into a squishy running shoe.
Aside from a singlet and proper shoes, a lifter is allowed to wear a belt, wrist wraps, and knee sleeves if they are desired. Tape can be worn on the thumbs, as long as the tip of the thumb is showing. A lifter will likely feel more confident and have a sense of belonging in the competition environment if they are dressed like the other lifters in their session.

A lifter needs a coach to compete well. It is almost impossible for a lifter to coach themselves during a competition without feeling overwhelmed. For a lifter to coach themselves through a competition, they would have to count their warm-up attempts, run back and forth between the attempts table and their warm-up platform, pay attention to their competitors’ attempts, and understand the timing of attempt changes. This is way too much for an experienced lifter to embrace, let alone a beginner.
There are important qualities that a lifter should seek from a coach during competition. A lifter should be able to trust their coach. This seems simple, but it allows the lifter to focus 100% on what they need to do to make each attempt. A lifter’s coach should definitely know the ins-and-outs of the rules. Duh, right? However, if a lifter sees a coach struggling to figure out how to play the chess match that weightlifting competitions can turn into, then the lifter has the potential to feed off the coach’s anxiety, which can lead  to unwanted stress. Lastly, a lifter should seek a coach who knows what the lifter is capable of and how they operate. Nothing is worse than having a coach who wants you to do more weight, even though you aren’t confident in the attempt. Lack of confidence already means a lifter has mentally failed the lift. Everyone operates differently. Some lifters rely on their coach to pump them up, while other rely on their coach to keep them calm. A lifter needs to know themselves and understand what conditions are ideal for them.

Goals are what drive people to be better. They are what keep people motivated to work harder. As a beginner lifter, it’s crucial to have a big goal AND a few smaller goals. Sometimes when people focus so much on their big goal, they become discouraged because it seems completely out of reach. This is where the smaller goals play a role. For example, I want to compete at an international competition and represent Team USA. However, before this happens, I know that I need to be ranked high enough to qualify for a spot on the team. To be ranked high enough, I know that I need to compete at a National event. When I started developing as a lifter, I could see the bigger goal somewhere off in the distance, but my main priority was qualifying for a National event.
Goals are constantly changing shape and molding into something. As a new lifter, it’s crucial to prioritize expectations for the first competition. Understand that the first competition is about gaining experience and gaining knowledge about the process. It is ill-advised to attempt PR weights during a lifter’s first competition. If a lifter has made 2/3 attempts on the snatch or clean and jerk and a PR is within reach, then go for it! Otherwise, it is better to build confidence on the competition platform and recognize that this first competition is a step toward the lifter’s larger goals.
With more experience on the competition platform comes more consistency. Don’t be discouraged if the first competition doesn’t go according to plan. Embrace the fact that there is something to be learned from every situation.
Most importantly, have fun! Seems cliche, but it’s true. If you don’t enjoy what you’re doing, then why do it at all?
Related Articles:
Common Habits that are Hurting Your Weightlifting
10 Things You Need to Know Before Starting Weightlifting

Ariel Stephens is a fast rising Olympic weightlifter based in Fort Mill, SC and competes for Team MDUSA, where she is coached by Don McCauley, Travis Mash and Glenn Pendlay. Ariel currently coaches CrossFit and Weightlifting classes to support her athletic lifestyle, with a part time nanny position. Ariel competed in swimming for the University of Hawaii-Manoa, before she started weightlifting in March 2012. Although Ariel has been weightlifting for a short period of time, her PRs of 115kg in the Clean and Jerk and 89kg in the Snatch make her a very formidable competitor in the 69kg weight class. Ariel is the 2014 American Open Champion in her weight class and has high goals for 2015. Watch for Ariel as she continues to improve, hopefully qualifying to compete for Team USA at an international competition, within the next couple years.

A Guide to Your 1st Weightlifting Meet, Part 1

Look, at some point you’re going to have to do it. Nothing you do is really going to count until you do it for white lights …

In 2013 at the American Open Championships, over 400 weight lifters competed from all over the United States.   With so many new competitors in the …

The Switch: Transitioning from Powerlifting to Weightlifting

Regardless of your reasons and goals for transitioning to Weightlifting it is worth it! So don’t look back

The Not-So-Evils of High Rep Weightlifting

Get to Know Donovan Ford

3 Tips for Your 1st Meet

I sit here today on the 5 year anniversary of my first powerlifting meet, I remember very vividly and fondly that first competition day. My first …