The back squat is one of the most important strength-training exercises. Weightlifters regularly use the back squat to build the muscles of the back, legs and hips.

Although it might seem like a simple exercise, most weightlifters don’t get as much out of the back squat as they could.

For me and the lifters I coach, there are several rules that have been effective in setting a proper squatting technique for weightlifting. In this post, I’ll talk about one rule that has been helpful in fixing my squat technique and understanding why my old squat technique wasn’t increasing my leg strength.

Rule #1: The squat should be a squat, not a good morning.

For lifters with decent flexibility and mobility, the positions they hit on the descent of the squat are nearly always good. There is relatively little stress on the quads during the descent, so the body places itself in the proper, balanced position.

For many lifters, the problem is that the body naturally tries to find the easiest way to squat by overusing muscles that are strong, while avoiding the use of weak muscles. This makes strong muscles stronger (to a point), and keeps weak muscles weak.

If a lifter’s back is strong but the legs are weak, the body will compensate by putting more of the responsibility of lifting the bar on the back, relieving the weak legs from having to do more work than they are capable. The squat becomes a hybrid between a good morning and a back squat, as demonstrated by the stick figures in the highlighted red boxes in the diagram below. The hips and head extend beyond the rectangle, placing more stress on the back, because of it’s exaggerated horizontal angle.

The good-morning back squat

Most good-morning squatters believe that they’re doing a back squat that will make their weak legs stronger. Instead, their legs aren’t being stressed in this form of a squat, and thus won’t grow.

If you want to increase the olympic lifts, leg strength is mandatory. Be honest with yourself – when you squat, do you feel your quads working? Or are you feeling an all-around hip/back discomfort and not much strain on the legs? If it’s the latter, then your weak legs aren’t getting any stronger, while your overdeveloped hips and back are continuing to overwork.

Fixing this problem and developing strong legs and a good squat is actually pretty simple. First, a lifter needs to feel the right positions of a back squat. To do so:

The wall will keep the hips from going back further than they were on the decent, and the body will be set in the position where the legs are forced to work as they should in a proper squat. Most good-morning squatters will feel their legs working more in this position with an empty bar than when they do heavy good-morning squats.

Once you’ve identified the muscles that should be working, try to squat with light weights (30-40% of maximum) for several sets without the wall. When doing so, ask someone to watch you to make sure the positions look correct. Imagine you are in a box like the stick figures and make sure you never leave this box when you’re squatting. Or, have someone stand behind you and block your hips from moving back further than they were during the descent.

It’s important to note that back squats don’t have to be absolutely perfect to make the legs work, but the closer a lifter is to staying within the rectangle, the more their legs will be forced to work. On ‘The Back-Squat-to-Good-Morning Scale’ below, the leftmost stick figure is the ideal. The second-to-left leftmost stick figures is allowable, hence it is still in the green. A back squat should never be ½ good morning. 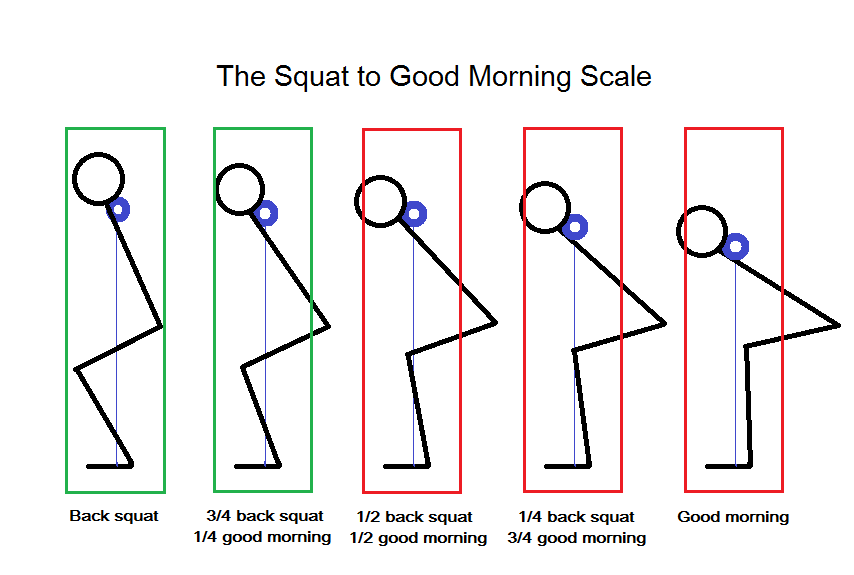 When switching technique in any lift, the weights should be light at first. The muscles with the biggest potential for growth will get stressed and grow quickly. Within 1-2 months, you should be back to squatting your old good-morning squat maximums, but with good form.

A comprehensive guide to Squat technique in one convenient series.