Well its taken a while for last weekend to really set in and I’m still not sure that it has but I’ll give you a recap anyways.

Last weekend, I competed at my first meet in slightly over a year, since herniating 2 discs (7mm at L4-L5 and 4mm at L5-S1). When I saw that their was a meet at SuperTraining and the caliber of lifters competing (Brandon, Lilliebridges, Derek Kendall) I knew that it was where I wanted to make a comeback.

Coming back from the injury was a long, often frustrating process, but with the help of my friend Dr. Jason Reynolds, along with some guidance from Dr. Quinn Henoch and Ryan Brown, I knew that I was going to be back stronger than ever. Learn more about my rehab in Jason’s articles Lumbar Spine Rehab Part 1, Part 2 and Part 3.

This training cycle was undoubtedly one of the best of my career. I utilized a modification of Brandon Lilly’s Cube Kingpin and will detail that in another article. As always Brandon was a great friend, advisor and iPhone coach throughout the process. I have spent nearly my entire athletic career training by myself, which has its advantages and drawbacks.

I’m extremely competitive and training in a group tends to cause me to work outside of my plan and training by myself allows me to be selfish and just focus on what I need to do.

Obviously though it has plenty of drawbacks, like lack of coaching, lack of spotting, lack of knee wrappers and nobody to push you when sometimes you just aren’t feeling it.

Lifters will often say “if I trained at blah blah gym then I’d be so much stronger” or “if I trained with blah blah lifters then I’d be so much stronger”, that’s BS. You are responsible for your own success, find intrinsic motivation and a way to succeed rather than blaming your shortcomings on circumstance. Control what you can control, don’t worry about what you can’t.

On to the meet…

I flew up to Sacramento and arrived late Friday night. I had originally contemplated cutting to 308s to take a shot at the wrapless World Record but about 2 days into carb depletion I realized I loved to eat and gave up on that plan cause I’m about dat carb life.

Saturday morning I crushed a huge breakfast with Brandon and then headed over to weigh in. It was great to see the Lilliebridges (nicest people ever), Derek Kendall (biggest person ever, also nice) and my pal Keith Caton, a strength coach at Baylor who was out to compete as well. I weighed in at 345.5 pounds of twisted steel and sex appeal and then we headed out for more eating. If you’re in Sacramento, definitely check out Burgers and Brew, amazing food. Then I spent the afternoon napping in a food coma, like any good day before the meet.

Headed out to dinner at the Cheesecake Factory with Eric Lilliebridge, his girlfriend Kayla, Stan Efferding, his girlfriend Creed (just kidding Creed) and were later joined by the rest of the Lilliebridge crew. Great times hanging out with that group, talking training, sharing stories and just having fun.

Sunday came and I was well rested and feeling great, but honestly until I feel a heavy weight on my back, I have no real idea how I feel. My premeet breakfast was 4 eggs, 2 ground beef patties (probably 8-10oz total), hashbrowns and 4 pieces of French toast, as well as several cups of coffee, a few lemonades and lots of water. 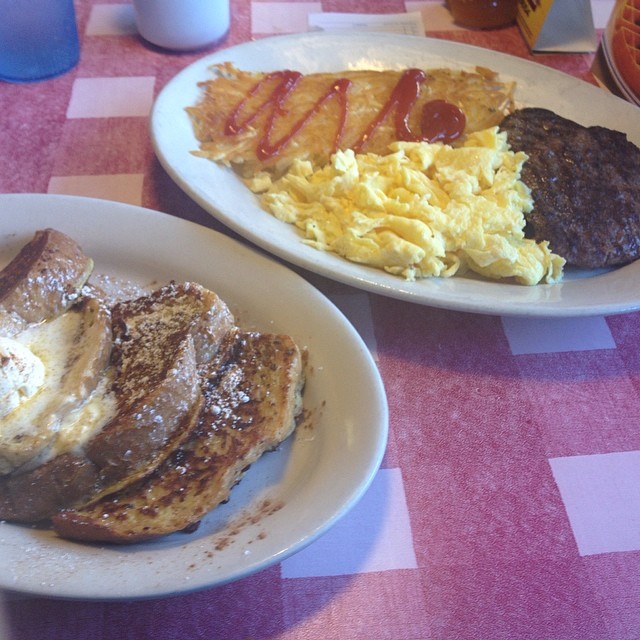 Warming up with other lifters isn’t something I’m used to because of training by myself, so I just went with the flow of DK and Ernie Sr and took quite a while to warmup.

Squat warmups were as follows…

I had only wrapped my knees 1x in the past year. Its hard for me to keep my leg locked straight to wrap my own knees and wrapping bent knees isn’t really productive. Brandon wrapped my knees here and there was definitely an adjustment to feeling that tight of a wrap. When I wrap myself, I can still squat to depth with just my bodyweight, with Brandon’s wrap, I can not to say the least. Both the 685 and 775 warmups were really just chances to feel things out. Squatting out of a mono is an adjustment for me too. I still walk the weight out but the setup is a bit tough because I’m used to shoving the bar into the rack and wedging myself under but the give of the hooks doesn’t allow for that quite as much.

Opener-848, this was really just a last warmup and another chance to get used to the mono and the feel of the knee wraps.

2nd-937, this was the weight I came to squat. I missed it here, just getting my weight back a bit too much. I’m so quad dominant that I actually prefer to stay a bit forward.

3rd-937, this was a solid make for me and a 32 pound PR. Stayed focused, kept the bar in my groove, had solid depth and was aggressive from the reversal through the finish. I’m very proud of this lift.

815 w/ wraps and 805 w/o wraps are the heaviest weights I squatted in training and I did a 945 beltless walkout and hold. Properly designed training and an ability to focus your energy in a meet will allow you to handle weights in competition that are significantly beyond what you did in a meet. My best training squats remain at 825 w/ wraps and 805 w/o wraps and that has now yielded a 937 w/ wraps meet PR. Training is for building your lifts, meets are for testing them, put your PRs where they actually matter.

Onto the bench. My bench made huge strides this training cycle, hitting 515 in the gym with a self handoff and long pause. 515 was a 30 pound gym PR and I knew I was in shape for a big meet PR.

Opener-523, touched a little high and wasn’t in a great groove but still made it for an 8 pound PR.

2nd-534, same issue as the first but another make. When I touch high, it causes me to flare early and press over my face which is not the strongest area for me.

3rd-540, touched lower and blasted it pretty well. This was my best and most aggressive of my 3 attempts. My goal was to bench 551 but I just took what was there based on previous attempts. I guess I can’t complain about a 25 pound PR.

The deadlift…I injured my back deadlifting, though I wouldn’t call it a deadlifting injury by any means, but there was still a hesitation on my part to pull heavy since it happened. So much hesitation in fact that I only pulled 2 heavy sessions in the past year, about 5 weeks ago doing 705 and 3 weeks ago doing 735. Almost all of my deadlifting work had been directed towards speed work (singles, doubles and triples in the 405-550 range) or sumo rep work from blocks.

2nd-766, this made a 1017.5kg/2242 total. Goal #2 taken care of, passing my boy Brandon Lilly, as well as a legend Jim Williams on the all-time total list. I actually think I should have been red lighted here and that my lockout was a bit soft, as I was losing my grip just short of lockout and felt like I couldn’t apply any power without dropping it. White lights aren’t what is significant to me, I want to feel like the lift was good by my high standards, so I felt a bit conflicted by this lift.

3rd-771, this gave me a chance to erase any doubt in my own mind about the total and the quality of the last pull. 771 moved great for me, especially considering the lack of hard deadlift training in the last year. My speed off the floor on all 3 of these was very fast for me, as I usually really grind off the floor and am stronger at lockout.

The idea of having the 8th highest raw squat of all-time and the 15th best raw total is tough for me to comprehend, maybe cause I know so many of the people ranked higher, so I’m like man I’m only the 6th strongest of my friends haha. I’m proud of how well I executed my plan and stayed focused through the day.

Thank you to Brandon Lilly for his friendship and support throughout training and the meet, thank you to Dr. Jason Reynolds and Dr. Joe Houde for treating my giant body and keeping my healthy, thank you to Mark Bell and Cara Westin for hosting a great meet, than you to the Lilliebridges and Derek Kendall for being so positive and supportive throughout the day, thank you to my friends at CrossFit Tustin for making a fun place for me to train everyday, thank you to my family for supporting me even though you don’t get why I do this, thanks to all my Juggernaut athletes for being awesome and inspiring me and thanks to all the Juggernaut fans and supporters for all the kind words and allowing me to do what I love for a living every day.

The SuperTraining Gym (Sacramento) Meet of the Century was one of the most anticipated powerlifting meets of all time, in large part due to the …

How To Have Your Best Weightlifting Meet

From Taper to Attempt Selection, we have all the important steps covered.

Guide To Your 1st Powerlifting Meet

Someone's first meet can be an intimidating experience. Chad Wesley Smith is here to provide you with a thorough checklist of everything you need to …

Complete Guide to Putting PRs on the Platform

Cover Photo by 9for9 Media One of the most common questions I receive in regards to powerlifting, is “How do you train with 600-800 pounds and …

A Guide to Your 1st Weightlifting Meet, Part 1

Look, at some point you’re going to have to do it. Nothing you do is really going to count until you do it for white lights …