Sometimes subtlety is overrated. I’m going to come right out and tell you why I’m writing  this article. There won’t be a twist at the end or “Aha!” moment. I’m just going to beat you over the head with it, because to be quite honest, after staring at the computer I find myself bereft of any technique more clever and and intriguing than the overt.

I want to talk to you about how powerlifting made a difference in one young woman’s life, and with that story I hope to inspire others to take up the barbell.

I want to first introduce our protagonist Ashley, and tell you where she was a bit over two years ago so you can be more impressed with where she is today. 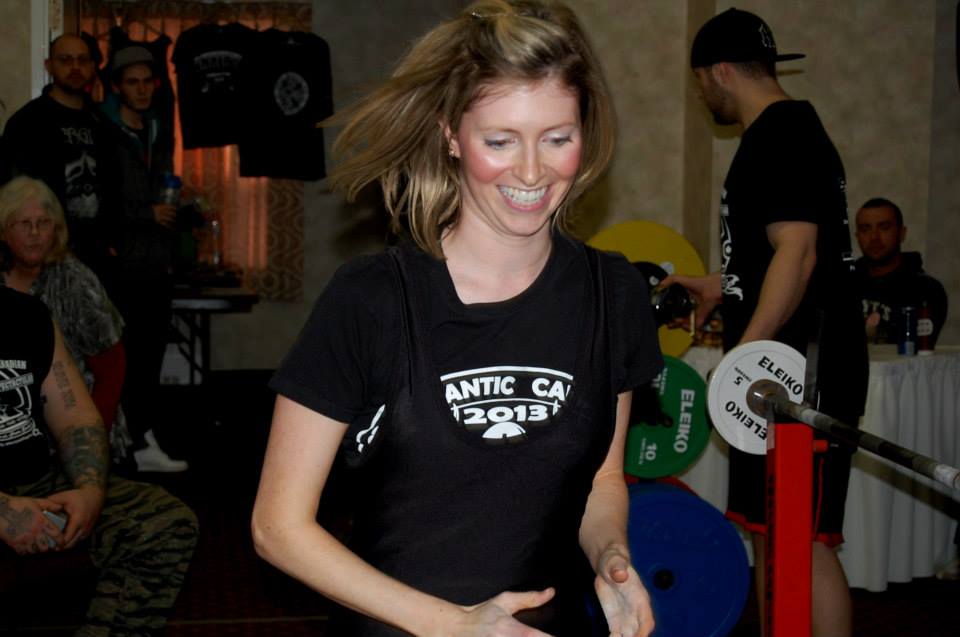 Where is she today?  Last month Ashley set the WPC Raw Amateur Deadlift record in the 44 kg class, and missed the Pro record by an inch.  She’ll get it soon.

Two years ago I met Ashley at my gym. She had been referred by her brother who trained with me, because she had been suffering from Ulcerative Colitis, was on chemotherapy for it, and wanted to talk to a personal trainer and nutritional coach about building muscle and eating to reduce inflammation.

We started by talking about nightshades and paleo nutrition, and I put her on a basic squat, bend, push, pull program.

Within about three sessions I knew Ashley should be a powerlifter.  There’s just this look people get when they ask “how much was that;” a certain look that fills a coach with more hope than a rainbow of Skittles and Carebears… especially if, like me, you think pretty much everyone should powerlift.

There were two big reasons why Ashley was exceptionally well-suited for it, though. One she was the youngest of 4 siblings, and quiet, thoughtful, and introverted.  I felt like it might help her to have an activity like powerlifting that she didn’t have to share, and where her efforts – and her efforts alone – would produce results. I find such types of activity tend to be really cathartic for introverts, and since Ashley was trying to deal with Ulcerative Colitis (UC), we needed to find things that would help her not feel isolated and deal with stress by expressing herself athletically.

Two, because of her UC, she sometimes said things about her body being broken, and how she had always been sick growing up as if it were her fate. I’ve seen this mindset before and it’s just as much of a poison as any chemical.  I felt that if we could get her strong (and I could see that she was already getting excited about being strong), she would start to look at eating well, managing stress, and exercising, not as things she had to do as a punishment for having a diseased body, but instead as thing she could do to become stronger.

Every situation has a positive and negative aspect. The responsibility of the coach is to reflect the positive and drive the mindset of enhancing the performance and the well-being of the athlete. I saw the spark – the iron bug took a big old bite out of Ashley on her third session when I showed her she could rack pull more than her body weight.

I told Ashley she had the potential to join our powerlifting team, and that she had fantastic levers to be a good deadlifter. This is one thing I truly love about powerlifting. Yes, of course some people have won the genetic lottery and are one big fast twitch fiber that wakes up and pisses excellence all day,  but that doesn’t describe most lifters. The nice thing is that no lifter sucks at all three lifts.  Depending on your levers, there will be at least one lift you can do well.

We cycled through a few different approaches. Since Ashley was just getting started she responded well to basic linear periodization of the main lifts with some special exercises thrown in.  To document the training of any client that I have worked with for two years would require a book, so I’ll just hit some major points that I found made a big difference for her.

1) Work capacity is everything.

When you are training someone who is getting chemotherapy, weighs 44 kg, and can’t properly digest a lot of foods, you had better start improving work capacity as much as you can.

Of course this doesn’t mean grinding the piss out of them, but having a quick and easy metric to assess work capacity improvements will directly translate into strength gains in light weight women with less that 3 years of training experience (in my opinion).  I used double arm kettlebell swings (added bonus was it was a good opener for her hips) as a barometer to ensure that our programming was having a Measurable Constant Improvement on said Key Performance Indicator.  As a result she was able to increase her training load, acquire better technical proficiency, and make gains in muscle and strength.

In the beginning, for two days after a chemo treatment Ashley wouldn’t be able to handle more than twenty minutes of mobility work and light conditioning.  After about 6 months she started forgetting that she had gotten a treatment the day before.  The only reminder was seeing the work capacity drop of about 10-20%.

It’s literally amazing how much work and strength 44kg can produce. The idea that you want to curtail loading parameters because it may result in a manish physique isn’t a factor. For one the drug Ashley was on literally ate muscle, so that was great, I often joked there should be an extra class for people taking performance annihilating drugs.  I know it’s been said to death but it’s important to make it clear to female clients that they won’t look like a man if they work hard and they shouldn’t use that as a subconscious excuse to suck. Now when we get a new female lifter that makes a statement about not wanting to get too big from powerlifting I point to 95 pound Ashley and say – oh you mean get big like that ?

If you want to get a 44kg lifter to move something, they need to do it correctly.

As a super heavyweight, sometimes I can get away with a bit of a grind since I have plenty of muscle and isometric endurance to correct something if it start to drift.  However at 44kg, Ashley’s force output relative to the cross sectional area of her muscles was shocking, and she didn’t have a lot of time to fix a bad position. We started with partial movements and progressed by first increasing load, then increasing range.  A lot of times we would work a lift from a full competition range, and then, seeing her get out of position, we would go back to a partial movement with 80% of that load and drill , drill, drill until she knew what perfect position was. Then if we hadn’t gassed her too much, we’d hit the full movement again.  I can’t remember how many times I thought “wow she must be gassed,” only to have her insist that she try again – lots of pluck.  To always be driving work capacity, we would do sled work, battling rope, and KB swings for 20-30 second bursts with 1:3 Work:Rest ratio usually. We wanted to improve her ability to train hard for powerlifting, not to run a marathon.

We wanted to work the legs independently because I felt that she would then be able to stay in the hole longer. She pulls sumo, and at 95% she’d pop up and try to lift with her back. Using rack pulls, chair deadlifts, and half-way-up-deadlifts we built the awareness to stay down.  However, I also think the work we did on building up explosive strength and strength endurance from sets of 4-8 step ups with a step set for the same height as her deadlift stance really gave her the tools to stay low and keep the torso upright.

The chins were just a great way to ensure she had the back strength to resist spinal flexion. At 44kg Ashley was able to do 8 chins and every time we invested a good deal of time in improving them, we saw a stronger, more rigid torso in the squat and deadlift.  We actually used high rep good mornings with bands and some bar weight super-setted with chins to hit the lats in both ways and try to encourage extra development.

Ashley entered her first competition on January 15th, 2013 – the Prince Edward Island Provincials for the CPU (IPF affiliate) – and hit a 40kg squat, 25kg bench and 77.5 kg deadlift to total 142.5. She has competed four more times in the past 18 months, and I can’t remember the last time she missed a workout. In her last competition she totalled 187.5 kg (including a 97.5 kg dead), increasing her total 100 pounds (over 30%) in 18 months. Her progress is consistent because it’s a function of persistence and careful analysis of what is working and what isn’t.

I guess the main thing I wanted to convey was that Ashley isn’t going to quit her job to move to Westside, and she isn’t sponsored, nor does she have any interest in making a big deal about her lifting. She’s quietly proud of her accomplishments, and that makes me quite proud of her.

We see a lot of ego in this sport, and it doesn’t do any favors in growing it. Powerlifting is an amazing sport, and we need to recognize that it won’t reach the people that would love it the most if we continue to focus only on the top 1%. Everyone has the potential to inspire and to be great.

I love seeing Bennie deadlift or Lillebridge squat as much as the next guy.  However, as coaches I think we need to celebrate any lifter, of any size, that shows the spark and the passion to pursue greatness, to overcome sickness and to choose a life of intention. That is what this sport needs. I’m proud to continue to coach Ashley and others like her that show up smiling every time with no other reason that the mere joy of it.

Thom Lamb retired from a ten year stint in the Canadian Military Engineers, to become a full time strength and conditioning coach in 2003. His athletes have set over 60 national and world records in powerlifting, however his real passion is to help people discover their inner athlete, and reconnect with their bodies, no matter what their level of fitness.
Coach Lamb can be reached on twitter at @coachthomlamb, and writes a blog at thomlamb.com .

Understanding the principles upon which effective Powerlifting Programming is built is critical to being able to create effective strategies to help athletes improve their strength.