Today we will discuss five very basic activities that are commonly used to improve joint mobility, muscle flexibility, tissue extensibility, etc.  More specifically, we will discuss how these activities can be poorly executed – which in turn, can waste your time, and in some cases, cause harm.  Finally, proper usage or execution of such activities will be covered.

There was a time when I was the guy spending thirty minutes on the foam roller before training, and another 30 minutes after training.  We had a relationship.  Me and the roller.  As one.  Forever.  Or at least long enough to make my training sessions last 3 hours.  After all, I had to break up all those adhesions, right?  Yes, I did “feel” a little better after rolling around for an hour; but when it came down to improving my movement patterns under load, there wasn’t much carry over.  It took me a long time to come to the realization that rolling around on a foam log with my extremities strewn about wasn’t going to take me far.  Here’s what the literature says:

a)    Short bouts of foam rolling do not improve performance measures such as vertical jump, sprint speed, agility.  (not surprising)

b)   Foam rolling is less fatiguing than planking.  (hahah I know. Research is funny sometimes)

d)   2 one minute bouts of foam rolling was shown to increase knee range of motion, and did not decrease force production.

So, is foam rolling harmful to performance?  No.  Will it potentially improve specific physical traits? Maybe.  Is it worth spending the majority of your movement prep on?  Absolutely not.  Find your tender areas and torture yourself for 5 minutes.  Then get off the damn thing and do something that is going to prepare your body for the loaded movement patterns that you plan to destroy.

Whatever you do, don’t be this guy..

This has become very popular over the last few years.  I am referring to hooking a band around a rack and holding the other end of the band, in an effort to stretch the shoulder joint.  The separation of the joint surfaces is termed distraction.  I have become more and more against this practice as a general go-to for the average person.  As is the case for many women (who tend to have looser joint capsules) and those with a history of shoulder instability, distracting the joint may exacerbate pain or dysfunction.  I prescribe distraction to some, but only after I have concluded that it can benefit them.  Below is a video of a modified version of this drill that can improve overhead range of motion, while keeping the shoulder in a more stable position.

One of the most common stretches known to man.  I am referring to the ole’ grab-a –rack-and-pull stretch.  You are probably asking yourself, “You can screw that up?”.  The answer is YES, and in a way that can do harm.  The way I typically see people performing this stretch is by letting their arm hang way back behind them, giving them a pinpoint sensation right in the front of the shoulder.  At this point, that is not the pec muscle that they are feeling, it is the anterior capsule of the shoulder and biceps tendon.  There are very few instances where I would recommend mobilizing those tissues in that way.  Most shoulder dislocations involve the head of the humerus popping out the front, so weakening that area of the capsule does not seem like a good idea.  Not to mention, you are stretching the biceps tendon (which is attached to the labrum) in an unnatural way.  Below is a video of what I am talking about, as well as the corrected version.

This is another very common stretch that I see performed incorrectly a majority of the time.  It is very similar to the pec stretch, in that the athlete simply hangs on the front of his or her hip joint capsule, with no regard for pelvic or lumbar position.  While lengthening the anterior hip capsule may pose less potential harm than that of the shoulder, I do not believe it is optimal.  Not to mention you are reinforcing a shitty pelvic position that carries over poorly to anything else.  The shoulders and hips should be stacked, and the abs should be engaged to support the trunk.  Below is a video of the incorrect and correct versions.

Hamstrings…  The bane of all existence.  Everyone and their mother has tight hamstrings.  It is true, many people do have tight hamstrings – but it’s because these muscles are in a constant state of stretch due to a lack of pelvic control. 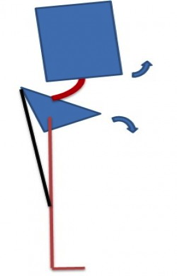 Nowadays, we are much more savvy to the fact that “tight” hamstrings can be alleviated by training the trunk musculature to do its job more effectively.  In the past, it was just to keep stretching and stretching.  All the stretching in the world won’t cure a bad position.  What we want is for the hamstrings to be restored to their normal resting length by repositioning the pelvis.  Below is a video of a widely used progression to restore a proper straight leg raise.  The straight leg raise is a useful indicator of movement capacity, because it requires a stable trunk and a mobile hip.

Sometimes it’s good to revisit the basics.  No matter how simple an exercise is, there’s an optimal way to perform it.  Be mindful of this in your training, as being disciplined with the little things can be what separates you in the long run.

A Different Approach to Mobility by Dr. James Hoffman

Quinn Henoch has a Doctorate of Physical Therapy from the University of Indianapolis.  He is the head of rehabilitation for Darkside Strength and Core Sports Performance in Louisville, KY.  He also works for the Kentucky Orthopedic Rehab Team managing orthopedic and sports related dysfunction.  Quinn played football at the Div 1-AA level at Valparaiso University as a defensive back.  He has also competed in track and field, Crossfit, and powerlifting.  Currently, he trains full time as an Olympic weightlifter, with the goal of breaking onto the national stage in 2014, as a 77kg lifter.
Website, Facebook, Twitter

With nearly 1000 articles available at JTSstrength.com it can be overwhelming to know where to start. Well here are in our opinion and no particular …

A Different Approach to Mobility

There has been a lot of hullabaloo regarding the concept of mobility. Although virtually all sports and sporting movements require an element of flexibility, the …

The article originally appeared in Volume 4 of Strong360 monthly.  If you like what you read, and you want more of this content, and to …

Hard training often requires some type of movement preparation or body maintenance.  Few people can go in the gym and crush weights day in and …

Glutes are fucking great.  They really are.  Hip extension and rotation are paramount in many athletic endeavors, as well as functions of daily life.  A …