July 23, 2014
Written by Team Juggernaut
This past weekend Blaine Sumner put on an epic performance at USAPL Raw Nationals in Aurora, CO going 9/9 including a 400kg/882# squat, to total 2150 raw w/ sleeves. This performance earned Blaine the prestigious of National Champion, as well as winning Lifter of the Meet (by Wilkes Formula) over an extremely competitive field. Let’s hear about his experience and training…

Q: Congrats on the great performance at Nationals, Blaine. Tell us about your mindset coming into the meet, especially after coming off a frustrating performance at Single Ply Nationals.

My expectations were pretty low. My focus this year was going to be on single ply and after bombing out of equipped nationals 4 weeks ago, I decided to do raw nationals for some redemption. Form is a bit different from equipped to raw so it was hard to try and find my raw groove with only 3 weeks of training. I knew I was going to have some very challenging competition with Ray Williams as he had just finished winning a dominant world championship.

Q: I know you were a little nervous about your squat coming into the meet, obviously you took care of business with 400kg/882 pounds. Talk about your hip injuries and the adjustments to your squat training you’ve had to make to continue squatting such huge poundages…

I was very nervous coming in. Raw squats had not been a priority in my training but I had still been doing some work. I just opened very light and smart at 783 and let the meet conditions dictate what happened. Everything was clicking and adrenaline was surging. I jumped to 843 then 882 to secure the lead after squats. Although I know 900 would have gone up, I had to play the attempts strategically since my goal was to win and not go for huge lifts.

Q: You had a perfect day, going 9/9, how do you go about your attempt selection? What advice do you have for people early in their powerlifting career as they choose their attempts?

Attempt selection is so often overlooked but is so important. In a raw meet, openers should always be very easy. Something you can hit for a triple in training any day. And you should generally always hit second attempts, around a 5% increase from your opener. Again something you know you can always hit. And third attempts depend on meet day. Need to pick them smart if you are battling with someone, or this is where you go for big PRs if not. When going into a meet people usually have their eyes set on the third attempt and that’s what they focus on is that huge number they are going to shoot for. I focus on what my opener will be and make sure it’s a joke how easy it is. Everything else will fall in place.

Q: You train with a high frequency and high intensity, what are your thoughts on overtraining?

I think overtraining exists and does happen, but not nearly as much as most people think. It is so incredibly hard to reach a true state of overtraining and not just reach fatigue. I squatted over 1000 lbs for almost 20 weeks in a row and was never overtrained.

Q: What does a vanilla gorilla eat on a training day to fuel 1000+ pound squats?

Meal 3: Lunch – at a restaurant somewhere. I eat whatever as long as it has lots of protein. 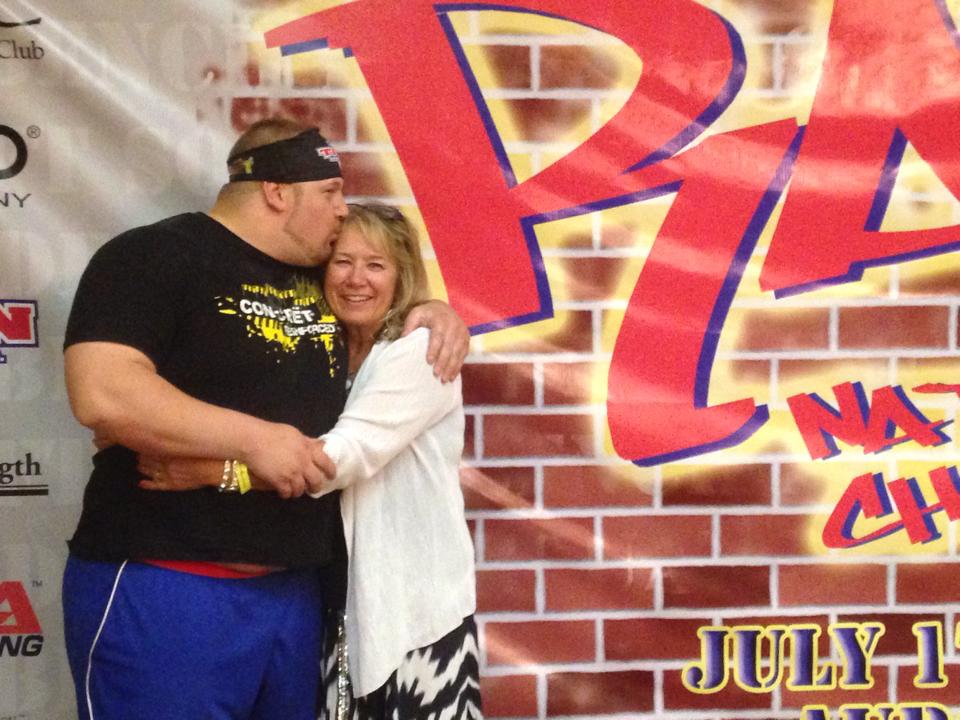 Q: Your videos squatting and benching huge weights w/o spotters are pretty famous now, how do you stay focused and motivated training by yourself?

It’s like anything else you put the human body through. You adapt. Now it would be very hard to train with a crew because I do so many reps of squat, bench, and deadlift every day it takes me 3-4 hours to go through my session. I wouldn’t be able to get through working on with people. I have no trouble staying focused. I have a big board that I post up things that motivate me, get some good music going, and just grind away.

Q: What does winning this National Championship mean to you?

This National Championship is the best I have ever felt after a meet. Winning Worlds in 2012 was great but I didn’t have any competition. This meet I had to battle Ray Williams after coming off a rough bomb at equipped nationals. Ray won raw worlds in 2014 and destroyed his competition and set a world record total. I have never had a battle this close and everything came together perfectly. The fact that I had to play strategy with attempts and had some attempts that were do-or-die and I hit every single one gave me more satisfaction than any meet I’ve lifted in.

In today’s powerlifting world people usually just go for huge numbers at meets and don’t often get the chance to battle head to head with anything on the line. But this meet both Ray and I, and our coaches knew it was going to be a dog fight with a guaranteed spot on the world team on the line. To be able to compete against someone and not just numbers was an awesome feeling. Ray is one of the best raw lifters to ever live and probably the best raw squatter ever. I’m sure we will have many more great battles in the years to come.

Use the code RAWCHAMP for 10% off Blaine’s Online Programming until 11:59PM Sunday, July 27th

Q: What’s next for Blaine Sumner?

My next meet is just going to be for fun. I’m doing USAPL Bench Press nationals (single ply) in September in San Antonio. After that I don’t have any plans until the Arnold in March unless another opportunity comes up.

I’ve been working on a book now for sometime that will be directed specifically at powerlifters but also athletes. I’m looking forward to it being different than other books out there. I’m also now offering online coaching and have been having great success with clients.

By Chad Wesley Smith EIGHT HUNDRED AND EIGHTY ONE POUNDS That is how much Blaine Sumner squatted in a belt and knee sleeves on April 1st, 2012 …

This past weekend at the 2014 Arnold Sports Festival in Columbus, OH, Team Juggernaut's Blaine Sumner had a performance for the ages! Blaine competed 3 …

Training for Both Raw and Equipped Bench Pressing

Even though raw powerlifting seems to have taken over in popularity in the past few years, equipped (geared) powerlifting still is very popular, especially on …

Why Your Hard Work Is Making You Fatter

Consistency is king, right? Everyone knows that some things work better than others, but no matter what, if you workout more, and eat healthy foods …

On June 22nd I competed at the USAPL Men’s National Championships in Philadelphia, PA. Going into this meet I had huge goals with full confidence …

With the amount of response and questions we have on a weekly basis for The $100 Diet, I decided to go back, do some tweaking and republish a follow up article with more information in the areas that matter.