October 8, 2013
Written by Team Juggernaut
By Corey Beasley
If you are reading this article, I’m assuming that you lift weights.

And when I say lift weights, I mean that you squat, pull, push and carry heavy stuff a lot.

That being said, to excel in mixed martial artists, I believe we need to approach strength and conditioning a little different.

Bodybuilders need to be big, symetrical and lean.

Powerlifters need to squat, deadlift and bench as much weight as possible.

Strongmen need to move odd objects in a variety of ways.

MMA fighters should be mobile, strong and powerful in a variety of positions, plus they have to maintain a furious pace for up to 30 minutes.

This variety of demands is unlike basketball, baseball, football, track, and most other sports, so traditional strength and conditioning routines simply aren’t effective.

Te majority of lifts happen in the sagital plane…straight ahead and straight back.

While they are incredibly effective at developing general strength, there are some other lifts, drills and exercises that can be used to fill in the blanks, so to speak.

Some of these exercises may seem unconventional to some, but they have a purpose.

They are designed to fix weak links, challenge in ‘fight specific’ positions and to solidify the body from head to toe.

Done correctly these will help a fighter get strong, last longer and stay healthy during rigorous training.

1.  Reverse Crawl with a Chain.

I learned this movement from John Brookfield and it has become a staple in our programs.  Initially I thought this would wreck the triceps, front of the shoulders and chest, but it was the complete opposite.  My entire upper back, shoulder blades, and core feel the brunt of this one.  Even people with traditional shoulder aches and pains from too much pressing haven’t seem to have any problems with this exercise.  This one is perfect for wrestlers,  jiu jitsu players and just about every mma fighter. 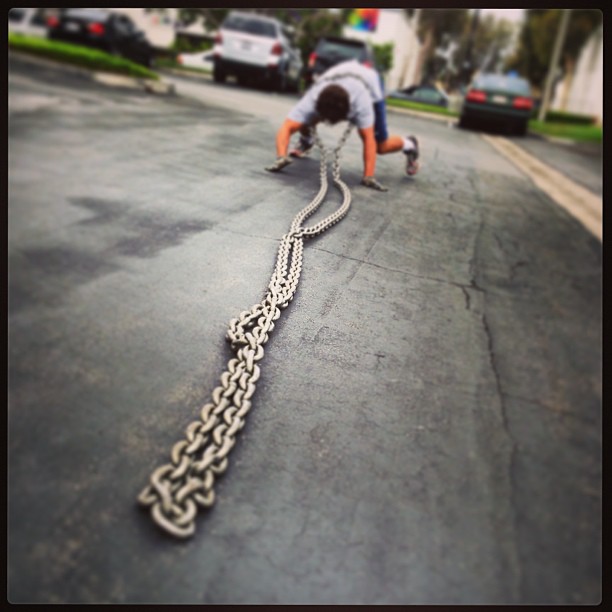 Crawling backwards seems simple, but it is incredibly challenging.  We typically start with body weight crawls and then add chains for resistance as they get used to crawling.  We usually crawl for 50-100ft per set and adjust the weight accordingly.   We use 100lbs chains at our gym and simply loop them up over our backs.  You can add multiple chains by using an adjustable metal link from Home Depot, then simply attach as many chains as you can handle and do work.  Some days we load up and go for 50ft, while other days are lighter and we crawl up to 30 minutes.  I would advise starting light, testing the water and then adding resistance and intensity as your body gets used to the movement.

Rules for this movement include contra-lateral movement (opposite arm and leg move together), hips relatively still (no excessive side to side) and keep the knees low ( couple inches off the ground).

Many of you probably already drag stuff, which is awesome!  You can use tires and sleds, but dragging heavy chains has become my new favorite. 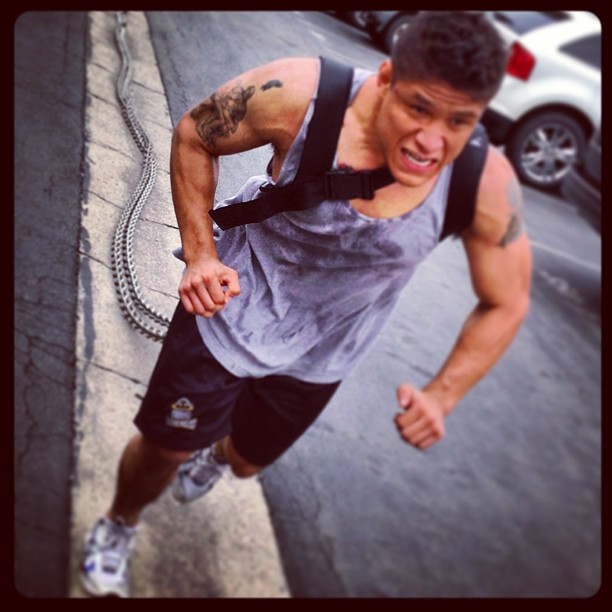 Using a harness, simply attach chains to the back and start walking, running or sprinting.  Because MMA demands bursts of effort and the perform for five minute rounds, we use a variety of intervals on this drill.  Some days are short 50ft bursts, while other days involve dragging the chains for half a mile.   The longer, slow drags are great for building work capacity and the aerobic system, while the quick bursts are vital for developing explosive power that is needed for takedowns during a fight.

Grip and pulling strength are essential for wrist control, pulling your opponent into certain positions, setting up takedowns, finishing submission and more.  While traditional rows and pulls are good, I have found that climbing a rope challenges the grip, arms and back muscles simultaneously and is brutally effective.  At our gym, we use 1.5″ and 2″ ropes to add a variety of intensity.  Obviously the smaller rope is easier to hold, while the two inch rope is much harder to climb.

Many athletes have to start with their feet on the floor and doing a modified climb while leaning back, but they quickly develop the strength in their hands, arms and back to start climbing.  Over time you will develop a ‘bone crushing’ grip that your training partners WILL notice.

Battling Ropes have become a hot topic over the last few years and are an incredible conditioning tool for fighters.  Although many people use them, I only see a handful of people using a variety of drills and exercises.  Typically you see slams or alternating waves, but I have found that these sidewinder drills to be the most difficult and effective for developing rotational power and endurance. 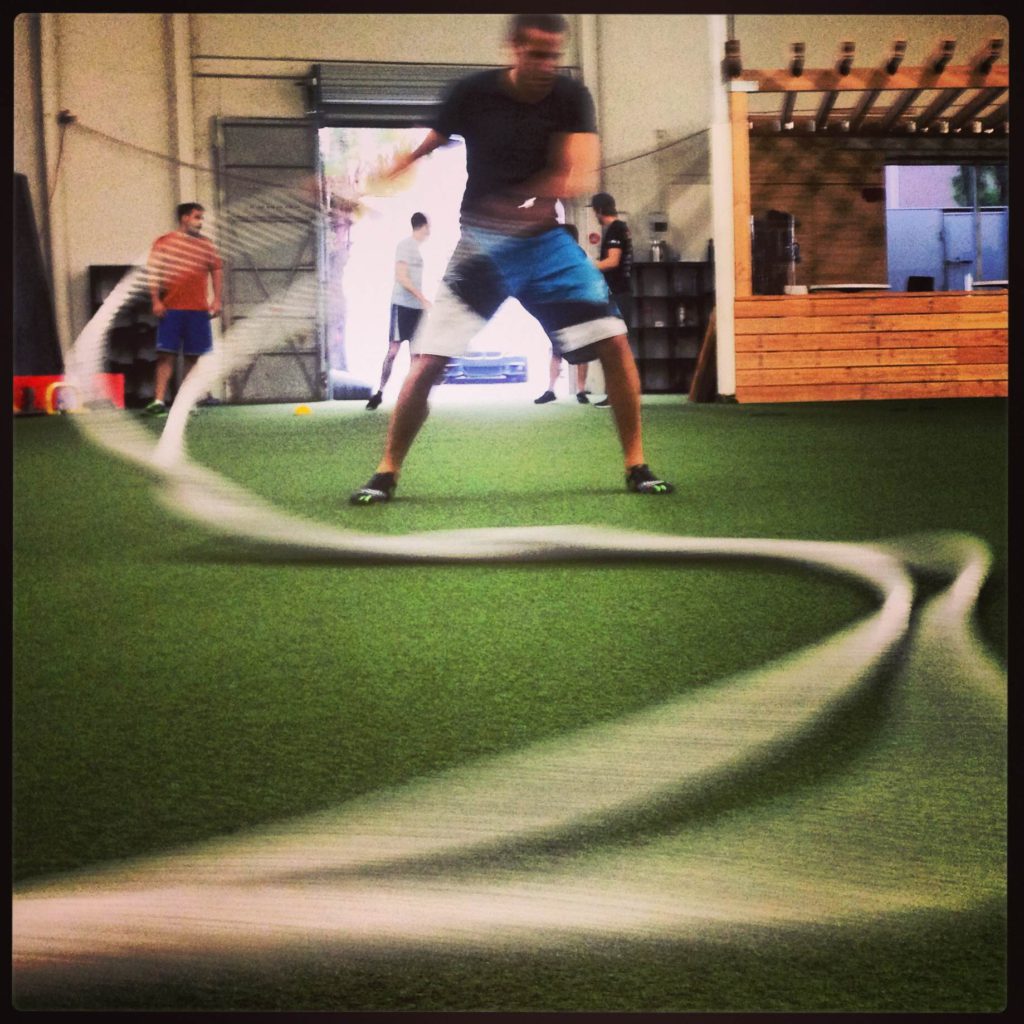 The sidewinders are performed on your feet, with a significant amount of slack on the ropes.  If you are using a fifty foot ropes, then move just about half way to the anchor point.  From their, assume an athletic stance and then move the rope side to side across your body as fast and explosively as you can.  We typically perform these for short, quick bursts of time (5-12sec).  The goal again is to move as quick and explosively as possible.

Done correctly, you should feel your upper body, obligues and even your hips and legs in new ways.  Perfect for boxers, kickboxers and any fighter that wants to increase the speed, power and endurance of their strikes.

To be honest, I was a little hesitant to share this drill.  It is another one of my favorite conditioning drills that I learned from John Brookfield.  Although it looks ridiculous, it is one of the most effective, humbling drills that I have ever used. 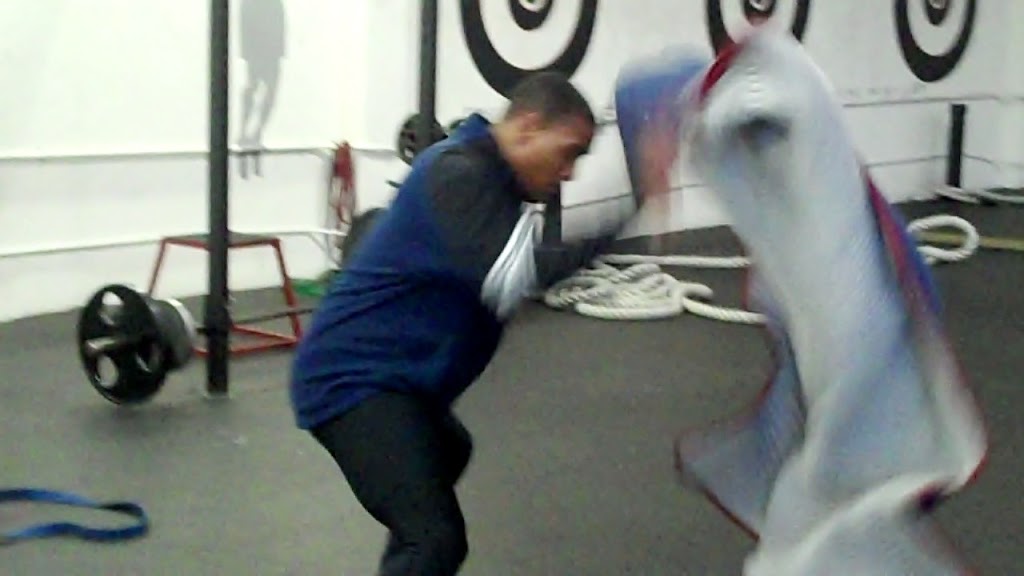 The idea is simple.  Grab a large beach towel or moving blanket by the corners, shake the balnket up and down as fast as you possibly can and move your feet equally as fast (shuffling and stepping in every direction.  Think of a squirrel trapped in a room.  The more sporadic and quick your feet are, the better.  Think “fast hands, fast feet” and make sure to breathe as you move.

The first time you try this drill, it is incredibly humbling.  30 seconds will seem like an eternity, but as you practice, you will quickly adapt and will be able to maintain speed for longer periods of time.  My elite fighters perform this drill for up to 30 minutes at a time.  Once you build up that ability to maintain speed for time, you will have no problem performing for the entire 5 minute round.

Strong360: 5 Ways to Make Yourself a Better Lifter

5 Ways to Make Yourself a Better Lifter

The article originally appeared in Volume 3 of Strong360 Monthly.  If you like what you read, and you want more of this content, and to …

Struggling with your deadlift lockout? Do rack pulls. Getting stuck a few inches off the chest in bench press? Hit some board presses. Oh, and …

We are, ultimately, a sum of every decision, action and reaction we make up this point in our lives. This is especially true in strength …

A System For Developing Competitive CrossFitters, Part I: A (Relatively) Simple Analysis of a Complex Problem

For a long time, I thought of programming as a highly logical process, almost mathematical. If I could just dial in the volume and the …