Too often these days in youth-level sports, there is a big rush to get to the top and excel at an early age. However, the reality is that no child under the age of 13 has won an Olympic medal or a Super Bowl ring (obviously). Each individual athlete will mature and progress within their sport at their own rate. If athletes are forced to specialize at an early age, they might experience more success more rapidly, but the chance of burnout and injury also increases given the high demands being placed upon them.

What needs to happen first is for the coach to discuss their long-term plan with the parents of the athlete. It is essential to obtain the parents’ buy-in to what needs to happen and why the sequence and “slow cooking” of the athlete is important, as nothing good will happen without their understanding and support. Ideally, when athletes are young (8-12 years old), they should have as much unorganized play as possible. This will allow them to develop in a natural setting and not be over-coached. During this time, training should consist of a wide variety of physical activities – climbing, running, jumping, skiing, throwing, catching, and so on.

Communication with the parents is the first step in creating a culture of long-term development and ensuring that young kids begin to enjoy the process of physical fitness, both for the short- and long-term. This is what took place when Tim Gray approached me about training his son Jarrett, who was 14 years old at the time. Tim had a plan for Jarrett that was unlike anything I had seen from a parent previously.

Tim intended to limit Jarrett’s AAU basketball games to 12 per year, set aside three months a year for physical training, and make sure Jarrett had at least two or three weeks per summer free from basketball or any type of training whatsoever. The only real basketball competition Jarrett was going to have was during his school season. The long-term goal was to give Jarrett the best opportunity to play in college and prolong his athletic career. From there, we planned backward to give this plan the best chance of success.

How did the planning begin? First, we examined the physiological profile of elite level basketball players. This included a resting heart rate of <54 bpm, moderate dominance of the parasympathetic nervous system, well-developed alactic/aerobic capacity, a 1.5 times bodyweight squat, and a vertical jump between 24-30 inches for athletes between 12-18 years old and 30-36 inches for college athletes. After these standards were determined, we then had to perform testing on Jarrett to see how he lined up to the elite profile. For this, we used the non-invasive Omegawave system for the physiological profile along with two jump assessments – the vertical jump and the 10-second jump test.

At the time of Jarrett’s first test, his resting heart rate was 73 bpm, he was more dominant on the sympathetic side of his autonomic system, he had strong aerobic and anaerobic indices, and his vertical jump was 28 inches. We were then able to compare these results to the elite profile and focus our efforts on what he needed to improve based on this comparison.

The program we developed for Jarrett at that time looked like this: 30-60 minutes daily of low-level cardiac output work with heart rates between 100-130 bpm, and strength training twice per week with an emphasis on general movements (push-ups, pull-ups, walking lunges, rear elevated split squats, etc.) along with teaching him the proper technique for the squat and bench press.

This early training also included learning how to perform different jumping exercises like alternate leg bounding, LL/RR bounding, LLL/RRR bounding, bouncy runs, lateral jumps, and bouncy jumps off a 12-14 inch box. All of these basic jumping exercises were performed in an extensive manner, that is, for high volumes at relatively low levels of intensity. This meant that no depth jumps were performed, and the jumps employed were not performed for maximal distance or height. The emphasis was on teaching the athlete to perform the various jumps properly. More intensive methods were saved for later on in the athlete’s career when they were necessary and beneficial.

For the next two years, we would focus on the activities outlined above and really try to maximize what Mother Nature had given to Jarrett using the most basic methods. It was not until his junior year of high school that we began to impose stress to him using external stimuli (barbell weights in the squat and bench) to advance his physical capacities. During this period, we also began using heavy resistance bike rides and uphill sprinting to develop his aerobic capacity. The heavy resistance bike rides (see video here) were performed for 10-20 minutes of work followed by 5-10 minutes of rest, and his heart rate never exceeded his anaerobic threshold. On the uphill sprints, he would run for <5 seconds (about 30 yards) and then would rest for 50-60 seconds before repeating. He would perform 20-40 sprints 1-2 times per week. seconds before repeating. He would perform 20-40 sprints 1-2 times per week.

The Omegawave system was also utilized on a daily basis to monitor how Jarrett was responding to the training. This unit assesses the readiness of multiple physiological parameters of an individual, including overall readiness, autonomic and cardiac readiness, central nervous system, and energy supply system. The testing is non-invasive and can be performed daily and takes between 2-7 minutes for instant results to be produced.

The Central Nervous System test uses DC (Direct Current potential of the brain), which measures the functional state of the CNS and overall readiness for training.

The Autonomic and Cardiac is tested through HRV analysis to determine the readiness of these two systems. Through this analysis, we can see immediate levels of stress, fatigue, recovery, and adaptation reserves of the individual athlete.

The Energy Supply System is used to determine the readiness of the aerobic, anaerobic, and the metabolic index, which indicates the overall effectiveness and coordination of the energy supply system. This is based on the relationship between resting electrical processes in the heart and the readiness of the energy supply system.

After Jarrett completed his assessment each morning, I would upload his test results via the Cloud. I would then prescribe the day’s physical training, recovery methods, nutritional advice, and his basketball skill work based off of the various readings obtained. This ensured that the training and recovery methods employed were aligned with his current physiological capabilities and needs.

To illustrate how I would utilize the data provided by the Omegawave to manipulate Jarrett’s training program, I have provided two examples of screenshots generated by the system. I first look at the overall readiness recommendation on page #1. This indicates that Jarrett’s “cardiac system is not ready for activities involving high volume of maximum or high intensity.” 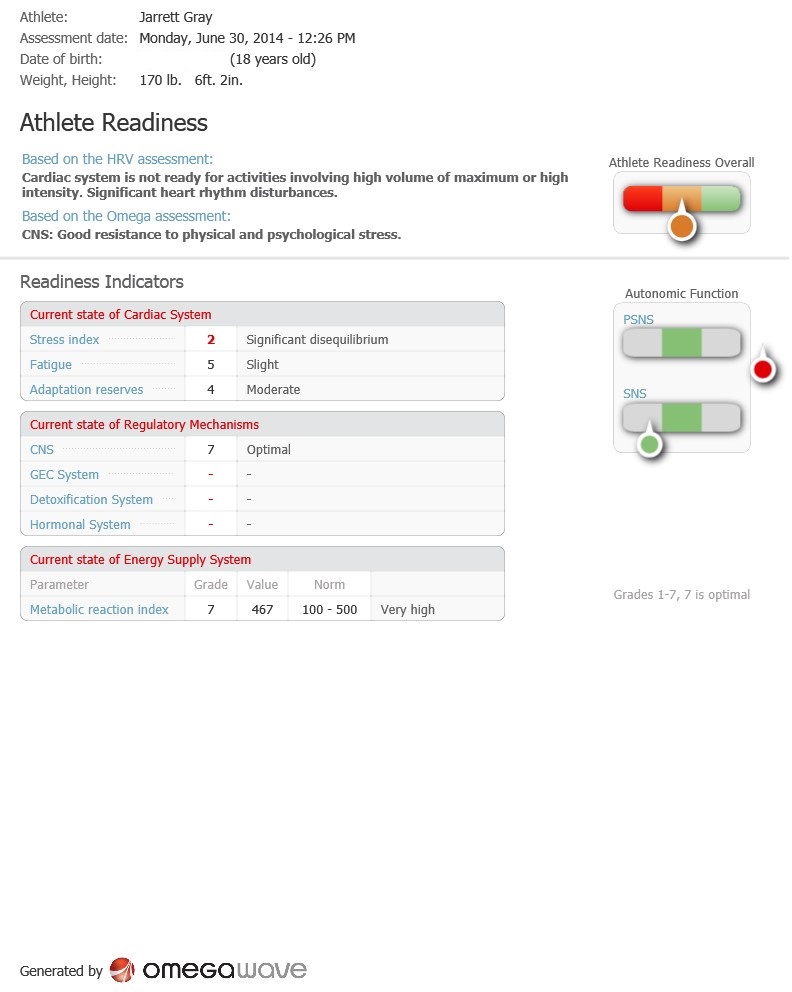 The second reading I look at is on page #2, where it indicates Jarrett is “marked parasympathetic hypertonia.” 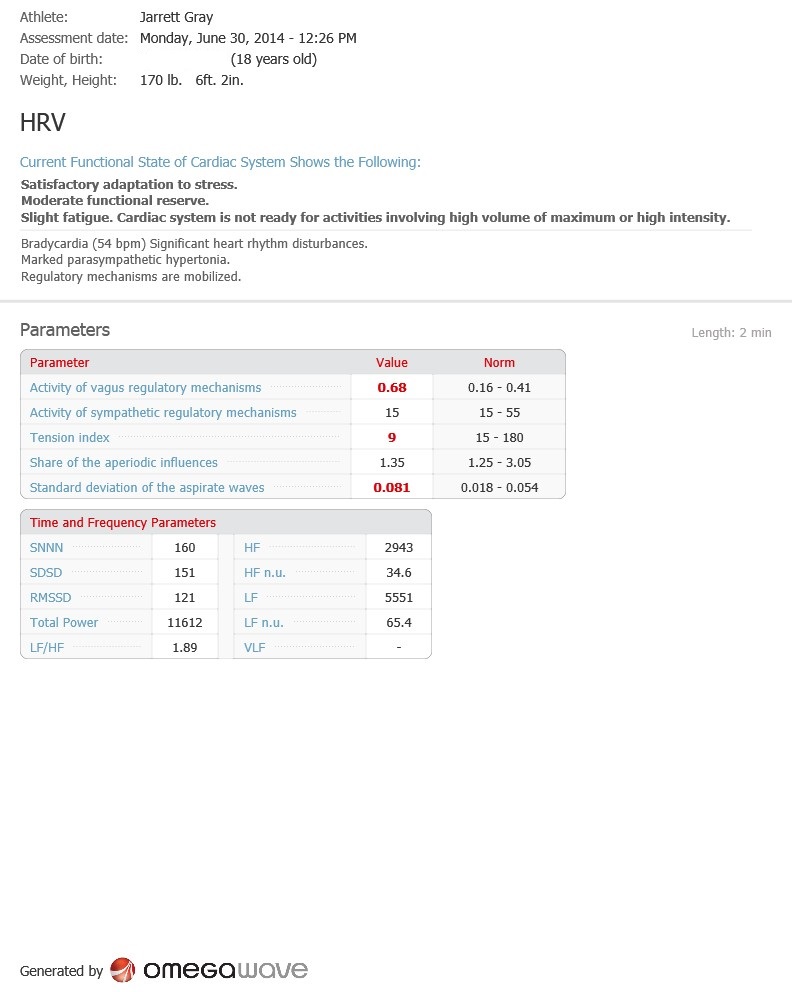 Given the first page reading, I would lower the volume of Jarrett’s strength and speed work by about 50 percent, with intensity remaining high with weights staying in the range of 80-85% of his max. Speed work would be reduced to only 100 yards of total volume (whereas a typical day would be 180-220 yards). Based on these readings, I would also recommend that Jarrett take a contrast shower or Epsom Salt bath after his training session was complete to stimulate the sympathetic nervous system. The recommended nutritional guidelines in this case would favor acidifying foods such as eggs, cake, cheese, and meat.

At the end of Jarrett’s senior year, he was one of the top two players in the state under the 3A classification and was given a scholarship to attend Concordia University to continue his basketball career. After four years of training, his physiological numbers looked like this: resting heart rate of 52 bpm, moderate dominance of the parasympathetic nervous system, his vertical jump had gone up to 35.2 inches, and he could squat 1.6 times bodyweight for three repetitions. Significantly, Jarrett did not suffer any injuries during this time and his enthusiasm for his chosen sport remained very high as he began another chapter in his athletic career at university.

(Note:  Mark would like to thank Peter Ingleton for his help with this article)

What I Did And Should Have Done As A Young Athlete

Mark McLaughlin is co-founder of the Performance Training Center. He attended college at the College of Santa Fe in New Mexico and is a native Oregonian currently living in Portland. His passion of all athletics flourished throughout his teen years. He participated and competed on various teams and in a variety of sports. Through his years of participation in sports and later in his education, Mark developed a deep commitment not just to sport but also to the complete well-being of the athlete. This passion and commitment leads to continual self-education in the field of athletic performance enhancement. Mark has been active in the field of athletic performance enhancement since 1997 and has trained over 700 athletes on every competitive level ranging from Olympic, professional, college, high school and grade school athletes. As well as working with individual athletes, the Performance Training Center works with and coordinates programs with high school and university strength and sport coaches. You can learn more about Performance Training Center at http://resultsperiod1.com/site/.

The Art of Coaching Youth Athletes

Early specialization in youth athletics is a nearly epidemic problem in the United States, causing too many young athletes to lose their passion for athletics, …