Even though raw powerlifting seems to have taken over in popularity in the past few years, equipped (geared) powerlifting still is very popular, especially on the international level. However, with the growth of raw powerlifting, it isn’t so easy to hide behind a bench shirt and be a weak raw bench presser and gain respect as a lifter. Staying strong both raw and in equipment can be done at the same time; it just takes an understanding of the technique and training principles behind both to accomplish your goals.

Because raw and equipped bench pressing are so different, it is crucial to understand the differences so each genre can be approached with a different and specific strategy. On the surface, the most obvious differences are that in a bench press shirt, the grip is usually as wide as possible, the elbows tuck to the sides more on the descent of the bar, and the bar touches lower on the body than it does for a raw bench press. This is all to maximize the leverages of a bench press and stay in the “groove” of where and how the shirt will give the most support. Contrary to popular belief, the bench press shirt isn’t a magical device you can throw on that gives you X lbs. of “carryover.” I don’t even use the word “carryover” anymore because the two lifts are so different in technique, they don’t deserve a direct comparison.

For raw bench pressing, nearly all of the work needs to be put into developing strength. It does not take very much time to perfect raw bench technique (grip, arch, leg drive, etc) or skill (making your technique efficient, precise, and repeatable every rep). But for equipped lifting, much less focus can be put on muscular strength and more on perfecting the groove of the shirt, when to tuck the elbows, when to flare, how to control the bar and not let it control you, etc. The most challenging part of using the shirt is fighting pressure and not caving into it. As the bar approaches your body, the amount of pressure you experience becomes exponentially more, like an anaconda squeezing tighter and tighter. If you cave to the pressure, you are done and will miss the bench. But if you fight the pressure and don’t bow down, you can throw up a huge bench. 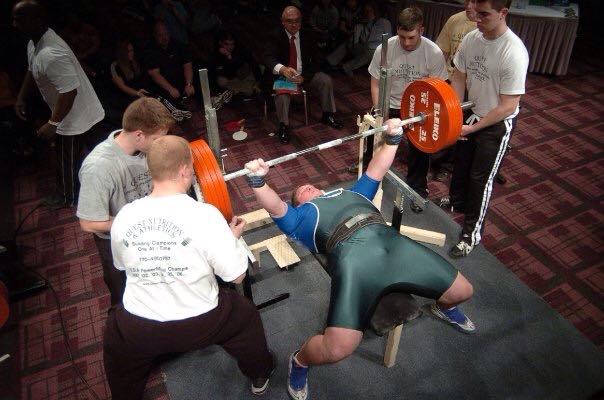 With the differences understood between raw and equipped bench pressing, the next step is applying those to your training. Since the raw bench press requires mostly muscular strength to develop and improve, that needs to be the focus. I believe in very high volume and frequency for raw bench pressing. Rep schemes should also vary from as high as 10s to as low as 2s and 1s. The bench press shirt is more about “practice like you play.” So the reps are lower into the 3s, 2s, and mostly 1s. Volume is important but it is more about the practice of repetition and executing a single rep identically time and time again instead of hitting massively high volume for hypertrophy.

A raw bench press requires strength through the entire range of motion; everyone has sticking points, but it is vital to focus much of the training effort through the entire range of motion. In equipped bench pressing, the bottom portion of the lift can be improved by technique and skill using the shirt, where as the top of the lift is strength-dominated. Board work is the number one way to improve the top-end strength in the shirt as it overloads the weight you can normally do in a full range press.

Because the techniques are so different and the mechanics to move the bar change between a raw and equipped bench press, it takes time practicing both to improve. Merely working on your raw bench press and then throwing the bench shirt on after a few month hiatus won’t yield optimal results. And only doing shirted benching while neglecting raw benching is a sure way to hamper the raw press. At the Arnold Sports Festival in 2014, I competed in a raw full power meet on Friday, equipped full power meet on Saturday, and equipped bench meet on Sunday and was able to hoist big benches all weekend long. This was due to how I trained. If you are trying to achieve big raw and equipped bench presses at the same time, I am a big believer in training heavy in the shirt and raw every week. The equipped day consists of low reps, mostly 2s and 1s, practicing perfect technique and form, and finishing up with board presses for a few more reps. The raw day consists of lots of volume, even up to 10 working sets, and varying reps over a training cycle from 10s far out down to 2s close to the meet.

With the popularity of “soft equipment” used in the raw powerlifter’s arsenal – such as knee wraps, wrist wraps, and assistance devices to bench press more – using a bench shirt is taking it the next step. It might even be a fun challenge for a raw powerlifter to do an equipped meet. And going by the same principle as using soft equipment for overload in training, handling a few hundred more pounds in a bench press shirt gives you the confidence to handle more weight raw.

INTRODUCTION In the world of strength training, ‘frequency’ is defined as how often you perform something. In more specific terms, I define frequency as the number …

Cover Photo by 9for9 Media It’s hard to believe, but I wasn’t always a grumpy, frail-looking strength coach. I was once a very jolly and lovable …

By Chad Wesley Smith Over the course of a training plan, as an athlete gets stronger/faster/more explosive (generally more capable of higher outputs), recovery becomes of …

How I Would Westside

The methods used by a certain powerlifting gym in Columbus, Ohio are undoubtedly among the most popular in powerlifting and strength & conditioning today. This …

Complete Guide to Putting PRs on the Platform

Cover Photo by 9for9 Media One of the most common questions I receive in regards to powerlifting, is “How do you train with 600-800 pounds and …