As a physical therapist, it would seem that patients’ sleep patterns are not something often addressed. On the contrary, I have a conversation about that very topic with most people that I work with. Sleep quality affects rehab potential as much as it affects general recovery and performance. When this topic comes up, I am often asked what sleeping positions are most optimal.

Sleep is priority, regardless of position. The worst sleeping position is better than no sleep at all.

Myth – If you sleep in a bad position, your tissues are going to get stuck that way. In the literal sense, this is untrue. It takes weeks for soft tissue to become adaptively shortened to a position. So, it is literally impossible for this to happen in one night of sleep, especially since we tend to move around. I will say that for the spinal structures, having them all twisted up with no muscular tension (when asleep) may send some nociception (threat input) to the brain; but to say that the bones are now stuck that way is likely not the reality. The kinks that some feel after a night’s sleep is likely neurological tone; and yes, position can contribute to that – but those things typically clear up in a day or so.

For healthy individuals, sleeping on your stomach is generally thought to be least optimal, due to the neck being rotated to one side. Remember, you will not get stuck that way, but for someone who is having neck or thoracic outlet issues it’s definitely not optimal. Sometimes I have patients who report numbness and tingling in the hands upon waking up. I would not recommend sleeping prone in these cases, as there is likely some type of brachial plexus impingement taking place.

In addition, for those individuals who are sensitive or intolerant to low back extension (it hurts to arch your lower back), this is probably not the best position for you either – as having a pillow under your head will likely put you in a decent amount of lumbar extension.

Funny thing about this “less optimal” position is that it happens to be very comfortable for some people; to the point where they are able to sleep most soundly when on their stomach. Remember, getting sleep is more important than the position you are in. So, if you are one of those who must sleep prone, I’d recommend putting a pillow underneath your pelvis to limit lumbar hyper extension. Also, I would use a thinner pillow for your head or none at all, so that your neck is not cranked so far back into extension, since it will already be rotated.

On the other side of the spectrum, for those who are acutely intolerant to low back flexion (a very recent disc injury), prone may a decent option for you to get some sleep.

Sleeping on your back is pretty benign for most. The neck is in a much better position than prone, so this is more optimal for those with neck or thoracic outlet issues. However, lying flat on the back can restrict the airway, and result in snoring or restless sleep. Anyone who deals with apnea will know what I am talking about.

If supine is your position of choice, I recommend using some type of wedge pillow to incline your torso a little bit, in order to breathe more freely. I also recommend putting a pillow under your knees – this will help to decompress the lower back.

In addition, you can add a small towel roll under the neck. This helps to restore the natural cervical curve and is more comfortable for some people. The towel roll can be placed inside the pillow case.

As far as where your arms should be in supine, in general, I would recommend not sleeping with them over your head in, due to blood vessel occlusion and/or nerve impingement. I have also experienced patients complaining of mechanical shoulder impingement after a few nights of sleeping with their arms over their head. If you have healthy shoulders, it is probably not much of an issue. If you already have shoulder problems, try to keep them down.

This likely the most optimal position for the majority of people. The airway is open and the spine is unloaded. The size of the head pillow should be such that the neck is in line with the rest of the spine. If you like to have one knee bent – put a pillow under the bent knee. If both knees are straight or bent (fetal) – put a pillow between knees. A pillow supporting the top arm can be very comfortable as well. The goal is to feel fully supported, so that you can let go of the tension your body is holding without reserve. 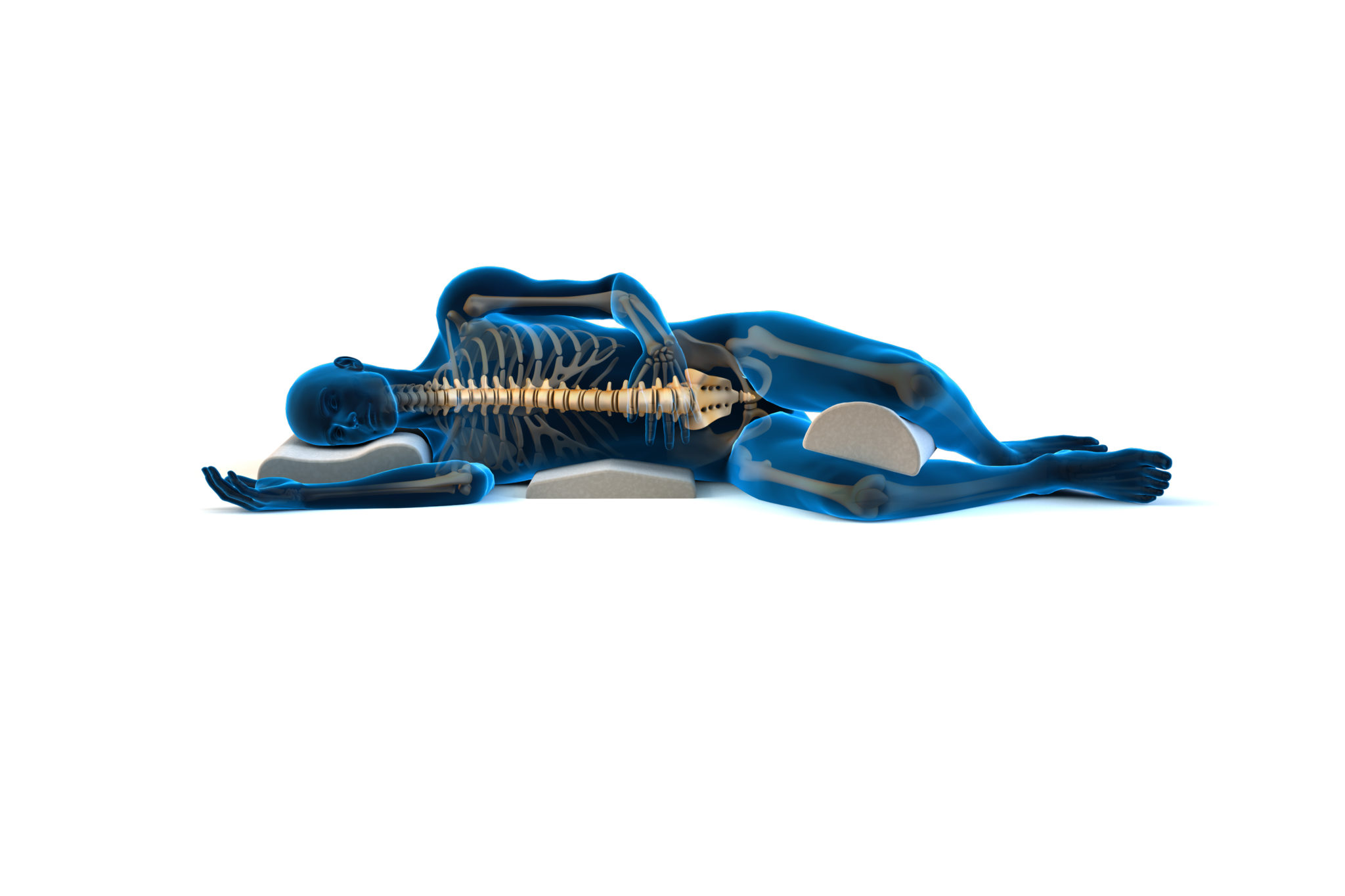 Sometimes we all tend to make this subject a little too complicated. Or, we read something and become fearful that we are doing harm to ourselves based on how we sleep. If a certain position allows you to be the most comfortable, and you wake up feeling fine, then there are no worries. If you are experiencing things like, neck pain, back pain, numbness and tingling, etc, try to quick tips here and see if you feel a change (also go get checked out by a health care professional).

The Pros and Cons of Powerlifting for Athletic Development

This is a continuation of Derek's series on the benefits and drawbacks of relying on individual training methodologies for improving sports performance.  You can find …

Strength In All Positions

Technique is King... or Queen, depending on who you’re talking to. The understanding of where your body needs to be to produce maximum force while …

The shoulder complex is an intricate network of muscles and joints working together to produce a substantial amount of motion.  This network also works to …

If you’ve been following Ryan Brown and I at Darkside Strength, you know that we like to use the “ground up” approach - building safe …