You either love them or hate them. Some coaches and lifters believe using percentage based programs is the only way to plan training while others rave about the restriction they create. True, some systems of training not based on percentages have been shown to be very effective, but the argument that any use of percentages creates parameters that are too rigid just isn’t true.

When writing training programs and coaching large groups of athletes or large groups of lifters, percentage-based programs are almost necessary to manage and progress these large numbers. The idea that these training programs can’t also be intuitive and meet the needs of the individual is due to a misunderstanding uses of percentages, along with not learning some easy guidelines that I’m going to describe here.

First thing first. There are way too many programs written that just don’t make sense. These programs have rep counts assigned to percents that don’t factor in the cumulative stress on the body of doing multiple reps at this given percent. Let me explain.

You’ve probably seen a program, that claims all percents should be based on a true 1RM, prescribing sets 5 reps of squats at 80% 1RM. Doesn’t sound too bad right? Well, let’s take a step back and think for a second.

Five reps at 80% 1RM means that the first rep of this set is the only rep that represents 80% of 1RM. Every rep after in a given set is then additional stress applied to the body that is greater than the demand of 80% 1RM. This is assuming, once again, that the program is based off a true 1RM and not a multiple repetition max, which is sometimes a safer, more effective method anyway. The 80% is based on what you can do for 1 repetition, not 5 repetitions.

This concept of relative intensity was taught to me by a Master Strength Coach who had learned it firsthand from one of the first Russian coaches to come to America. The idea can be traced back to Aleksei Medvedyev’s writings. It was an observation of watching the effect that a total volume at a given percentage had on elite weightlifters.

So, for some practical insight as to how hard a certain rep range is with a  given percent, we can use this equivalency chart:

Let’s use 5 reps at 80% again to further explain. Looking at the chart, the numbers in the left column represent reps and the numbers on the right represent percent 1RM (move decimal two places to right in each case). So for 5 reps it was observed that an elite weightlifter could only use 85.7% of 1RM. This is the absolute intensity for 5 reps. So 5 reps at 85.7% is what’s called a 100% relative intensity. Hypothetically, it would be impossible for a lifter to do 5 reps at 89% 1RM, according to this.

So to determine just how hard 5 reps at 80% 1RM hypothetically should be, divide the percent in decimal form (.80) by the absolute intensity for 5 reps (.857). We get something like .9333 or 93.3% 1RM. Now it makes a little more sense why you may start missing reps and why these types of programs often aren’t as effective in practice as they look on paper. You or whoever programs for you may not understand the rules in the first place to even make it work.

Should you calculate the RI for every for every training session you write?

You could, I used to. But then again, I also used to have hair. It’s gone now…I don’t calculate it anymore.

Instead of calculating everything, just memorizing or looking at the absolute intensities when you program can be a basic reference point. Roughly estimating it will help you not plan on doing something that is technically way outside was is possible to do. This is especially true if there are multiple sets with this set/percent range.

Maxes are constantly changing with inexperienced athletes (team sport or strength) because they can get stronger every week, though so relative intensity can’t always be your personal savior. This is why coaches with good intuition and education will have some wiggle room in programs and assign open ranges. For example – 3-5 reps at 75%-83% 1RM. This can also be a far more effective approach for groups of lifters and large teams in particular which is what I’ll explain next.

Vary the Load But Keep the Progression

With this frame of reference keeping us from getting carried away with percentages, an undulating model of training where high, low and moderate loads can be alternated within a training week is great to use to manage the needs of these large groups and teams mentioned earlier.

Specifically, daily undulating periodization (DUP) can be very effective in developing size, strength, and power in multiple athletes who have constant time constraints.

Weeks can be planned out and arranged ahead of time where each day has one of four types of training load. Personally I prefer to not complicate things by labeling days hypertrophy or strength focus but rather keep it simple and label it heavy, moderate, light, and power loads.  In this case, the load refers to the percent of 1RM with “heavy” focused on training limit strength using ranges like 1-4 reps at 85-95% of 1RM and “light” loads being on the other end using 60%-75% with high rep ranges like 8-12.

This is the basic outline for each day:

It needs to be mentioned again that this a basic outline, not a specific program to be followed. Barbell sport athletes will do well to include another heavy or very heavy day, while and team sport athletes need room for agility/change of direction drills etc.

Focus on The Big Picture to Keep it Working

Once you have a good feel for the guidelines and a solid framework in place, intensity and volume can be adjusted week to week based on the needs of the athletes. One or both of these variables can be increased or decreased. All the while, the program can keep a pretty linear progression where the volume decreases as intensity (percent of 1RM) rises over time as competition gets closer.

A very basic example of this progression just from one week to the next can look like this:

It’s, of course, ideal to have all this planned out and execute on that plan as is, but coaches who think their program was given to them on stone tablets atop a great mountain are the reason why critics say percentage programs aren’t flexible enough to meet the needs of athletes. Dropping percentage or volume down is something that can be done, and should be evaluated on a week-to-week basis. Understanding the ranges discussed above will help make sure that the particular day of training you’re altering still keeps the emphasis that was planned.

These on-the-fly adjustments can be determined by feedback from having athletes or lifters use a 1-5 rating scale. A rating of 1-2 is given if the work in the weight room for the day felt easy to the athlete and he or she felt like more than three extra reps could have been done on every set of their core lifts. A 3-4 rating is given if the load for the day was more challenging but still doable, and they could do anywhere from one to three more reps on all their sets without popping a blood vessel. Finally, a 5 rating is given if the individual feels like he or she is pushing it to the max on one or more sets even while lifting submaximal weights.

You don’t have to be tech-savvy in collecting this info. Instead, each athlete can just be given a sheet of paper with his or her program that has a space on the bottom to write in the general impression of the training session.

Concerns with distinguishing real symptoms of overtraining causing fatigue among athletes are very real, but especially with team sport athletes, erring on the side of caution is more beneficial in the long run. Strength athletes can be pushed a little further but adjustments should still be made if the stress of life like a crying baby or an all night drinking bender has them feeling worn down.

If an individual athlete is consistently giving a 5 rating, his program can be altered. If you see this same rating across the board with a bunch of athletes in a large group, you have a good indicator that training needs to be backed off as a whole.

This is a type of poor strength coach HRV monitor.

Each case is different as to what should be adjusted, and I try to stay away from making sweeping statements most of the time, so it’s up to the judgment of the coach whether to adjust training loads and emphasis for an entire week or just for a particular day or two according to the feedback from the athletes.

For example, if the plan calls for the heavy load day to be on Wednesday, but its preseason and the coaches ran the athletes into the ground yesterday during a late practice, plus your sheets from Monday’s high volume day almost all have a 5 rating, indicating the players were already struggling with the stress, the athletes could instead train power to aid in recovery and try to get them moving explosively again. They can come back in a couple of days after some more rest and hit the heavy day so they don’t miss a week of progression with anything.

Or, instead of restructuring the week, the total volume or intensity of the week or even just a particular day can be reduced. The lower end of the range for that particular day should be considered.

Anyone whose been responsible for large teams and whose been accountable to the coaches of these teams knows that it’s naïve to think than any training program written is so perfect that adjustments will never, and should never have to be made. Problems always come up and having system in place to handle them can make you more effective as a coach.

The rating system and the implementation of DUP are definitely not the only effective ways to mange large groups, but they’re just two ways among many I’ve found to maintain consistency and help balance stressors, which is really what it’s all about. 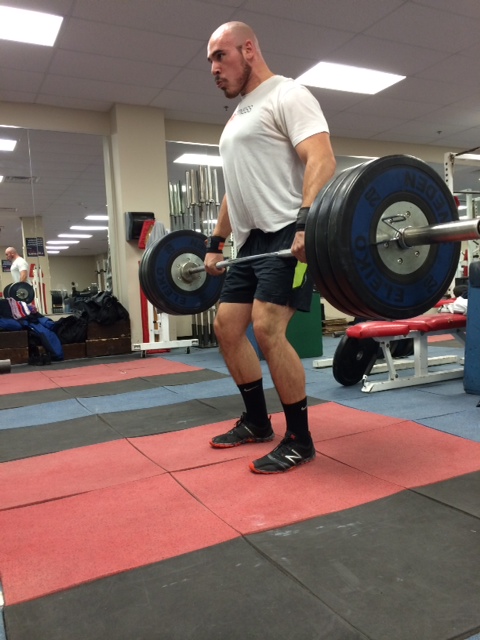 Jesse Irizarry is a Division 1 collegiate strength and conditioning coach who gets fired if he doesn’t produce actual results. He is on a personal vendetta against the nonsense being presented as strength training and performance advice. Jesse coaches athletes of all kinds, helps them reach their full potential, and keeps a blog at www.jdiperformance.com.

How can you measure the speed of your bar and utilize that information?

Putting Evidence to Work for Your Program

Evidence Based Practice If you have ever studied exercise science, read a personal training manual, or have been involved in coaching or strength and conditioning in …

How to Design Weightlifting Programs

Max Aita dives deep into the principles that guide his program design.

There is Only One Type Of Periodization – Part 2

This is a continuation of THIS article.  If you haven't read part 1 yet, check it out before diving in. 1.) Choosing the Right Mix of …

4 Ways To Make Any Program Work

There is constant debate about what program is best, Cube Method, Westside, Juggernaut Method, 5/3/1, the list goes on. All of these programs have their …