The Clean Eating Conundrum and My Switch to IIFYM

There are not two words strung together in the English language that I have come to loathe more than “clean eating”.

Let me kick this article off by asking the question that I have been trying unsuccessfully to figure out for months now:

What the hell does “clean eating” even mean?

Most people seem to be in agreement that it means whole, unprocessed foods. That is great, but there is a ton of grey area there.

Ahhhh! Nobody can agree, yet everybody is obsessed with “clean eating”.

I was a die-hard clean eater for the longest time. Hell, I still have posts and recipes on my site that are labeled “clean”, even though I was never totally sure what I thought that meant. I was avoiding things such as dairy like it was the plague the majority of the time because it wasn’t what the masses deemed “clean”, even though my body tolerated it just fine and there was no real reason for my cutting out the occasional Greek yogurt.

It got to the point that I even started to get scared to eat out at restaurants. Even though I was in charge of what I ordered, I was convinced that some vegetable oil or non-grass-fed butter would sneak its way onto my meat and vegetables. I sat through countless meals, sipping on water as everybody else ate what I came to believe was poison-laden food. (This, as you can probably imagine, was quite a hassle when it came to traveling.)

This went on for a couple of years until I started to get fed up and crave foods, likely from extreme restriction for so long.

I remember wanting Rice Krispies cereal on top of Greek yogurt (weird, I know), yet forced myself to refrain because they were processed. I was dying for a cookie now and then but held back because it wasn’t “clean”.

Instead of just indulging in a small amount of Rice Krispies or a cookie here and there, I was finding myself tossing back obscene amounts of nuts and nut butters (because they are “clean”, duh) in a desperate attempt to satisfy my real cravings. In hindsight, I’m convinced that I’d have been better off just eating the damn cookie rather than 700 unnecessary calories coming from the dietary fat in pecan butter.

Similar to how I used to be, I see people suffering with this mental tug-of-war all of the time. They force themselves to eat whatever-they-call “clean” during the week, and then the weekend rolls around and it turns into a free-for-all binge. Nachos, liquor, pizza, and plenty of sweets. Monday rolls around and they feel terrible physically and horribly guilty, sending out Tweets and Facebook posts declaring how they are “Back to clean eating!” 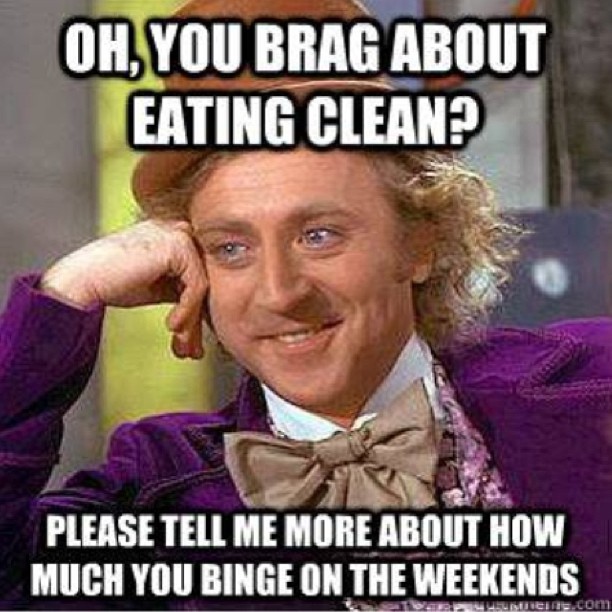 And the cycle repeats itself over and over and….

“The definition of insanity is doing the same thing over and over again yet expecting different results.”

Enter IIFYM (If It Fits Your Macros)

There are some people that are perfectly happy living off of meat, eggs, fruit, veg, and sweet potatoes all of the time and if that is you – great! Nothing wrong with that at all!

I am admittedly not one of those people. My need for an occasional cookie or frozen yogurt was the impetus for my switch to an IIFYM approach about five months ago.

IIFYM means that you set daily macro parameters (protein, carbohydrate, and dietary fat) along with a daily fiber goal. All macros and fiber must be consumed each day and if it fits you can eat it.

It seems pretty black and white, but people go about this in a few different ways. Some people – myself included – believe that macro timing makes a difference for fat loss and strength gain, while other people think it has no bearing whatsoever. Some people are cramming wine and beer into their macros, while I still believe that alcohol is detrimental to both fat loss and performance.

My daily nutrition utilizing IIFYM is set up in a way that I eat for health and performance first, and I naturally gravitate towards nutrient dense foods.

I eat whole, unprocessed foods with plenty of protein, fat, and vegetables throughout the day and then I have some room for whatever I want at night. This is always meat, veg, rice and/or sweet potato, followed by fruit, greek yogurt and protein powder, or maybe a cookie and protein pancakes. It all depends on what I’m in the mood for.

The trick, like I said above, is eating for health and performance first.

If you are subsisting on nothing but cheese dogs, Pop-tarts, and Raisin Bran don’t be shocked when you feel like shit at the gym the next day and your digestive system is in complete turmoil.

IIFYM is not for everybody – and that is okay!

Some of the Benefits

The wonderful thing about this approach for me and many of my clients is that we finally feel balanced. If we crave a food we simply fit it into our macro allotment and we eat it. Badda-bing-badda-boom. No guilt. No problem. Weekends are no longer crazy binge sessions because I get to eat what I want throughout the week. I don’t stress anymore about going out to dinner and having to be off my plan. Anything can be on my plan, it’s just about modifying the things and portions I eat that day.

You can not tell me that your 3,000 calorie “epic cheat meal” each weekend is better for you than my eating a cookie or a bit of frozen yogurt every night and not having a weekly binger.

Things to Consider With IIFYM

There is a large population of people that feel that weighing and tracking foods is a form of extreme behavior and that alone can trigger obsessive tendencies in them. Fair enough! I have worked with plenty of clients that feel this way and I fully respect it so we take a different approach. No problem. We are all different and every body must be treated as such.

IIFYM can also wake the beast in some people, and leave them wanting nothing but garbage foods all of the time. If this is you, you may want to take a different approach. Some people really do need to refrain from indulging, even in small portions of treats, because they find that they can’t stop, macro allotment or not.

Last, there are people that cringe at the thought of weighing and tracking foods.

Again, I get it. I’ve found that some clients really do, for whatever reason, struggle tracking macros from an executional standpoint so we take a different approach. If basic math isn’t your strong point (no judgement!), IIFYM might not be for you.

Personally I am experienced enough with macros and portion sizes that it is, often literally, a piece of cake for me and takes practically no time.

Something else to think about is being responsible enough to eat the foods that makes your body, digestive system, and performance the best it can be. Can I stockpile carbohydrates so that I can go to Cookie Town tonight? Sure, but I never feel good the next day after eating a ton of sugar and I plan on training tomorrow so that would be foolish.

You have to learn what makes your body and mind function at it’s highest level possible, and resist shoving a bunch of crap food into your macros just because it fits.

This isn’t as cut and dry as my giving you some equation to follow. It depends on what you have been eating in the past, what you eat currently, what your goals are, what you weigh, how active you are, your training, etc etc.

There are macro calculators online and I’ve never used them, but I’m skeptical of how accurate they could be unless they require you inputting all of the info I listed above. Your best bet is to work with a knowledgable coach that can help you set something up…. or go ahead and give it a shot and manipulate as needed! Sometimes you just have to dive in and try it.

I’m not going to shove IIFYM down your throat, but I feel it’s important to let people know that there is a way to do it and keep things healthy and geared towards performance.

If you are like me and are happiest with a little somethin’-somethin’ every day to stay satisfied then it may be worth a shot.

Don’t get so caught up in nutritional dogmas and rules. Health should always come first, but that includes mental health and if your nutrition is making you a looney-tune or causing restrict/binge/restrict cycles then it’s time to re-evaluate.

In sum? Eat what makes you healthy, happy, and perform your best, and save a little room to just eat the damn cookie once in awhile.

Big thanks to Matt Jansen at Inov8 Elite Performance for all of his support, assistance, and coaching!

At Juggernaut we strive to bring you the highest quality content from athletes and coaches who are currently in the trenches, training hard and dominating …

Some of our best articles of all-time

How To Warmup for the Clean

Use these drills to warmup before your next Clean workout.

5 Tips for a Better Clean

Improve your clean with these 5 key technique areas

Develop stronger and more efficient cleans with this comprehensive guide.

Pillars of Clean Technique | The Explosion

The explosion from the hips is critical to impart height to the bar while keeping it close to your body for a successful life. This …

In the continuation of our controlled practice session with our JTS sponsored lifters we worked on the Clean & Jerk. Several athletes had their own …