In Part 1 we discussed some of the pros and cons for physique athletes building the foundation of their programming around the “Big 3,” and for some, competing in the sport of powerlifting.

Many of the recommendations within this article series will be built upon the foundational principle of managing and progressing training volume long term. Therefore, it’s important to understand its role in stimulating training adaptations. However, before we can discuss the role of training volume, let’s define what it is, and what other variables contribute to it.

What is training volume? In its simplest form, volume is simply the amount of total work completed. This can be quantified within a set, an exercise, a training session, a mesocycle, a macrocyle, etc.

There is only one type of periodization – Part 1

There is only one type of periodization – Part 2

Total volume can be quantified a number of ways depending on what you are trying to measure. Perhaps the most common way to quantify volume is to calculate total tonnage using known variables. This provides a product with a unit in lbs/kgs.

With tonnage, it’s important to realize that load plays a role in establishing the volume. Therefore, with tonnage, intensity and volume are NOT two distinctly different variables as commonly described.

A few additional ways volume could be quantified: total time under tension (TUT), total reps, total exercises, etc. So why is tonnage the most common way to quantify volume? Likely because the other methods of measure are also positively correlated with total tonnage, or they neglect the load aspect of the equation. If you rack up 15,000lbs of squat volume, chances are you had a substantial amount of time under tension. If you did 30 total reps on squat, that’s pretty meaningless in the absence of knowing the load used. Tonnage seems to provide the most comprehensive estimate of training volume, and can be used to objectively examine/plan our training.

Volume is the main predictor of adaptation, provided adequate intensity is met

The execution of multiple sets had been shown to be associated with greater strength and hypertrophy increases than single sets[vi] [vii]. This increased training volume influences force production through an increase in neural efficiency, as well as increases in hypertrophy. Volume’s effects on hypertrophy can likely be attributed, in part, to the prolonged increase in muscle protein synthesis (MPS) that been observed with multiple vs single sets [viii].

So if training volume is the variable most highly correlated with hypertrophy, why not just do tons of reps with an empty bar to get huge? It sure would be easier. While volume is the main predictor of strength and hypertrophy as a whole, research indicates intensity to be the driving factor up to a point.

This threshold of intensity varies by application. While there is data indicating that training at an intensity level of ~60% of 1 RM is needed to yield a hypertrophic effect under non-hypoxic conditions[i] [ii], there is also evidence demonstrating that the use of 30% of 1RM taken to failure can also lead to increases in strength and hypertrophy[iii]. Furthermore, the use of blood flow restriction (BFR) has been shown to lead to increases in both hypertrophy and strength with loads as little as ~20-30% 1RM[v].

The story continues to unfold with regards to the required intensity eliciting strength and hypertrophic adaptations under different training conditions. That being said, our dual athlete will be spending the majority of their time >60% 1 RM anyway. Specificity should still dictate the loads used most frequently in training for the dual athlete. The best way to squat 500 lbs is still going to be practicing to squat 500 lbs.

Volume as a means of progressive overload

Early in one’s training career it’s easy to create overload and increase tonnage simply by adding weight to the bar. Volume can still be relatively low, and strength and muscle will pile on like an avalanche (usually in retrospect). As an example, I recall being a die hard DC (Doggcrapp) Training disciple early in my training career. A single rest pause set with heavy loads and a loaded stretch was all I needed to literally make linear progress in strength and hypertrophy for two full years. I set PRs almost every workout, and I was a believer. I remember being really proud of myself for finding the ultimate program so early in my training career. However, just after my second year using DC Training, strength and hypertrophy came to a slow crawl. I came to the depressing realization that progress isn’t forever linear, and in order to keep progressing, increased sets and/or reps would need to start to play a larger role in overload.

Many frustrated trainees may first turn to different exercises, different tempos, different rest intervals, or perhaps attempt to eat their way to a new PR or inch on their arms. When it comes to programming, ALL of those options should fall below the principle of volume progression on the pyramid of importance. It’s not to say they don’t have an impact, but they should be implemented on top of a foundation of gradual and strategic volume progression.

So should one just increase volume to break a plateau in size and/or strength? From a long term perspective, yes. From a short term perspective, it depends on the magnitude of increase and where the athlete is in their annual plan.

Volume increases should be gradual and on an as-needed basis. Milk what you can out of every stage, but realize more work will ultimately need to be done down the road. Unfortunately, overly aggressive volume progression can be a common observation with some eager trainees. Some go from training a body part 1-2 times a week with low-moderate volume, to jumping into a program as aggressive as Smolov. It’s natural to want results as quickly as possible, but if it takes you 7 weeks to finish the base mesocycle of Smolov, then:

1)   You aren’t ready for a program with that volume.

2)   You likely don’t need anywhere near that volume to progress optimally at your level of training. Think of that as a good thing, and spend that extra time doing something you like outside of the gym.

There seems to be a threshold of volume, beyond which there is a point of diminishing returns. That threshold is a moving target as we become more advanced in our training career, but the goal is to not raise it prematurely.

That being said, some non trained individuals just seem to inherit an insane work capacity from the get go and that needs to be accounted for and not undercut. This has its positives and negatives. As an example, take a guy like Pete Rubish. In his early training career, his work capacity already extended beyond that of many seasoned lifters. Much of his raw strength was accrued in this time with him grinding out set after set in his parents’ basement. His early threshold was very high, and this dosing of volume (combined with his genetic predisposition for moving heavy objects), led to some absurd feats of strength at an early point in his career. But that rapid progress didn’t last:

“After I moved out of my parent’s house, my training seemed to drop-off.  The intensity wasn’t the same and my volume was pretty low overall.  A typical deadlift day would include working up to a max single to triple and then doing maybe one backdown set of 10 followed by some uninspired pulldowns and hamstring curls.  I think this is a big reason why I stalled for so long.” – Pete Rubish

Such is the “curse” of an extremely high work capacity. You still have to progress your volume long-term, except that you start from an already-higher ceiling than most. Since Pete reimplemented a higher dose of volume and frequency, his progress has picked back up. 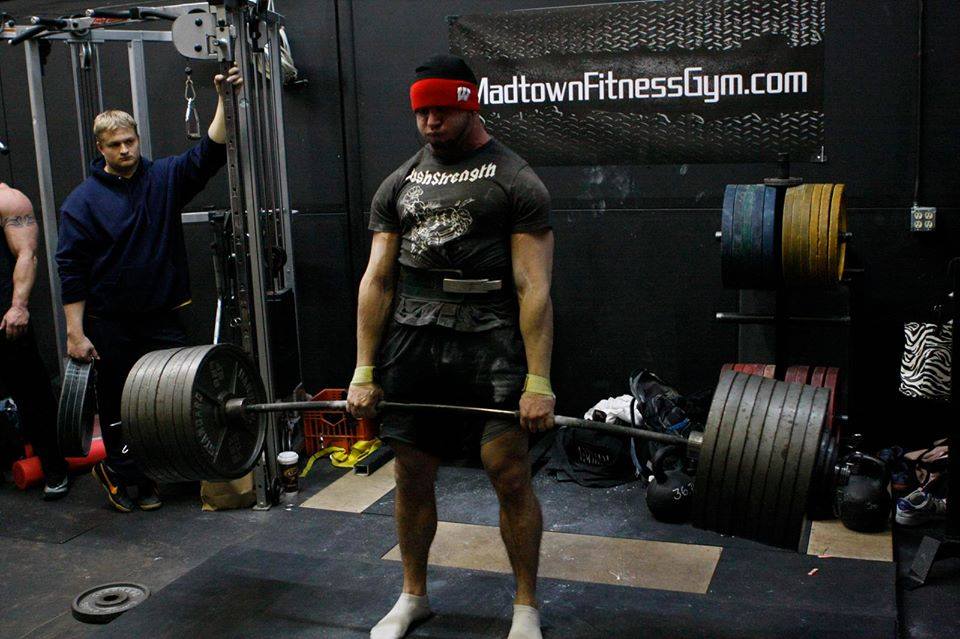 So by now you should know that progressing volume is very important. However, its also important to know that volume can’t be progressed in a linear manner either. You would die and run out of hours in the day. The implementation of transition phases in the annual plan is a useful tool to essentially re-sensitize the athlete to the volume stimulus, while striving to maintain strength as best they can. This will be discussed in more detail later when we discuss long term planning.

An often-overlooked takeaway: increasing volume is merely a tool that’s applied to accomplish further overload. It isn’t the hammer, but the force created by swinging it that drives a nail. Increased volume does not directly cause hypertrophy.  Your squat PR and increased biceps circumference are merely physiological adaptations to the mechanical loading, metabolic stress, and muscular damage that’s imposed under that umbrella of volume. By increasing these stimuli for training adaptations, training volume will increase as a result.

Managing training volume is an important concept in the annual plan. The rest of this series will begin to elucidate and strive to fine tune concepts of periodization for the dual athlete.

Brian Minor, MS, CSCS is an natural pro bodybuilder, and raw powerlifter. He is a coach for INOV8 Elite Performance specializing in strength and physique oriented training/nutritional programming. He can be reached at [email protected]com

INTRODUCTION There are many controlled dimensions of the strength training equation and even more uncontrollable dimensions. When laying out a program, the things we can control …

Understanding the principles upon which effective Powerlifting Programming is built is critical to being able to create effective strategies to help athletes improve their strength.

There is Only One Type Of Periodization – Part 2

This is a continuation of THIS article.  If you haven't read part 1 yet, check it out before diving in. 1.) Choosing the Right Mix of …

Are You Training with the Right Amount of Volume?

How does JuggernautAI Powerlifting find the right amount of training for you?