Perfection: Enemy of the Good When it Comes to Nutrition

A couple of years ago I was following a really regimented nutrition plan. After many months my willpower began to wane, as it often seems to do with so many of us, and I was sneaking extras, preferably dark chocolate pecans if I had my way. I’d toss back a big delicious handful and then I was immediately overcome with guilt.

I’d think, great, this day is ruined, and then I’d proceed to do what the majority of people do when they fall off their plan. Rather than just veer ever-so-slightly off course, I’d go whole-hog and blow the rest of my day to smithereens.

Since I screwed up by eating the chocolate, I may as well throw all kinds of stuff down the hatch! I’ll order a pizza for dinner, and who can have pizza without wine, and how do you not have dessert?!

The next day would roll around and I’d be pissed (and usually bloated). Why didn’t I just stop when I ate the chocolate? Because I expected perfection, and anything shy of it wasn’t going to cut it. I had an ‘all or nothing’ mentality.

Day in and day out I was expecting perfection, which was a huge mistake. I saw my success with nutrition and training as black and white. Everything was either perfect and I felt like a total rock-star, or it was a shit-show and I felt like a failure; there was no middle ground. All it took was one small handful of chocolate to make the day feel like a monumental waste, which then resulted in a landslide of poor food choices for the remainder of the day.

“Don’t let the perfect be the enemy of the good.” – Voltaire

Maybe it’s because we are so overcome with guilt that we eat even more to help ourselves feel better, or perhaps it’s because we get angry with ourselves and suffer from such a severe case of the Eff-its that we convince ourselves that it just doesn’t matter anymore.

The problem is that it does still matter and eating more junk will not pacify the situation. In fact, it will make it all worse, both from a mental and physical standpoint. 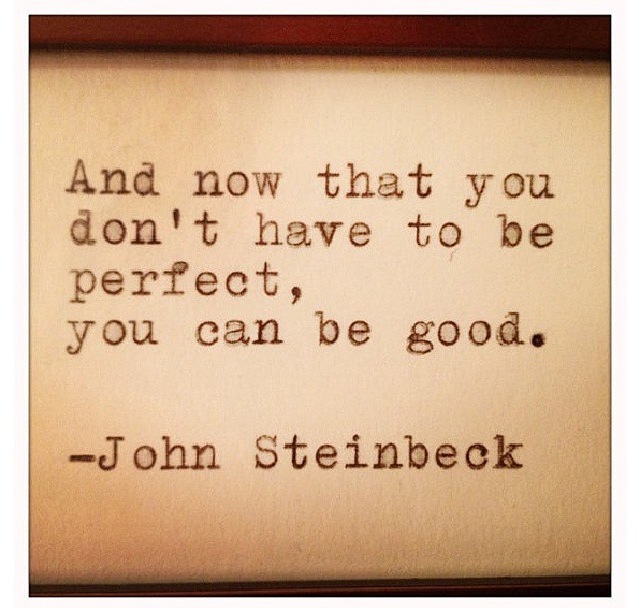 Just because we eat one unplanned donut in a moment of rainbow-sprinkle-induced euphoria doesn’t mean that our body flips a switch and decides everything else we eat for the rest of the day doesn’t count.

This means that the single initial dietary indiscretion may not cause much damage in the big picture, but shit-canning your entire day every time you mess up probably will.

So you screwed up? Big deal. You’re human. Just don’t wait until tomorrow to turn things around. You need to salvage the rest of your day as soon as possible because your body does not issue a free pass to continue eating whatever you want.

We will mess up and we will make mistakes. The important thing is how we choose to respond to it. Do we throw everything away, or do we do our best to hop right back on track?

All we can do is our best. It’s probably not ever going to be perfect, and that is okay. Screw perfect. It’s not feasible. When we let go of the idea of having to be perfect, we get rid of unrealistic expectations and the guilt that is associated with it, and we can focus on consistently being damn good, because that is where the magic happens.

A 30 minute workout is always better than no workout, a 5 minute meditation is better than nothing, and a couple of meals per day full of nutrient dense food is better than saying “to hell with it all, I’ll start again tomorrow…  but first I will completely ruin the rest of today.”

Today may not have gotten off to a perfect start, but you can still make it damn good.

“Don’t let the perfect be the enemy of the good.” – Voltaire

Born and raised in Salt Lake City, Jen Comas Keck is a nutrition expert and NASM certified trainer. Keck has a very diverse fitness journey, from cardio queen, group fitness instructor to figure competitor. This range of experience allows her to speak on a variety of topics facing people. In addtion to the mergers and acquisitions company Jen owns with her husband, she also operates a successful nutrition coaching business.
Website, Facebook, YouTube, Twitter

Nutrition for Physique and Performance

All of our best Nutrition content in one convenient place.

Confused by all the conflicting nutrition information you see? Sick of misinformation about nutrition? Want to look, feel and perform better?!   The Performance Nutrition Encyclopedia is …

Nutrition On The Road

One of the most frequent topics I discuss as a nutrition counselor is how to successfully stay on track with goals while traveling. This is …

If your diet sucks you’ll never reach your true strength potential. I don’t care how “effective” your training program is, how badly you want to succeed, …

Disclaimer: Any claim and recommendation that I make in this article is buttressed and developed out of the research that is cited in Explosive Nutrition …

The wait is over, Part II of Become Your Own Nutrition Coach is finally here. In Part I, we discussed a number of introductory points, …

The most overlooked and misunderstood aspect of max effort lifting is nutrition. What you eat and when you eat it can impact your ability to …

We’ve likely all been there before, your diet is going perfect for awhile and then you have a trip planned or a business dinner/meeting. For …