This article is the third installment in a four part series on applying the Bondarchuk system of sports preparation. For those who have read the previous two articles (Exercise Classification and Transfer of Training), I apologize for the delay in putting this article out. In the past I have not been as thorough in researching various details in reports on Soviet Sport systems, especially in terms of application, as I should have. This is just part of the learning curve in terms of talking about the way that the USSR did things in sport, the more you know, the more questions there are to ask. My point here is that I wanted to be very thorough in my understanding of this article’s topic so that took some time. For those of you who have not read the previous articles this one can be read first, but you can find the other two (here; hyperlink). If you have questions on this article or the series, please feel free to comment below or email me at [email protected].

If you have a question I do not know the answer to, I will ask Dr. Bondarchuk himself and put his answer out on here. So if you have questions, fire away. There are also other resources and experts more qualified than myself to discuss various topics related to Dr. Bondarchuk’s work. Names such as Dr. Michael Yessis, Yosef Johnson, Dr. Bryan Mann, Martin Bingisser, and others. These experts can all be consulted if questions need to be explored in more detail.

In 1972, Dr. Anatoliy Bondarchuk defended his Doctoral thesis. His topic of research was, “Why do throwers in track and field reach peak condition at different times?” This study was prompted by observations made by Dr. Bondarchuk and his colleagues in the Soviet Sports Program. They observed that on a team of throwers, who have the same coach and began their preparatory cycle at the same time, some athletes would peak going into competition and some would not only lack peak condition, but considerably under-achieve on meet day. After discussing the training with coaches, there was something happening that couldn’t be explained. Compliance and attendance were excellent, athletes seemed to be working hard. Some just adapted slower than others. So the research was set up as follows;

Those of you in research or who have a research background, please go easy here. I didn’t ask Dr. B about the intricate details of his study methods. I asked for a rundown of what happened. If you want a full write up to chew on and critique, I can try to track it down. In our application here, anecdotal evidence will suffice as far as I’m concerned.

This meant that the null would have said something like this –

“When using the same training means, athletes all adapt in a similar time frame and      reach peak form at the same point in the training process.”

The study included the following parameters –

– Month in which preparation began (for some July, for some November, etc.).

The results of this study revealed that indeed, the null hypothesis that all athletes adapt the same is to be thrown out. There was however, a pattern to the way that athletes adapted to a system of exercises; three patterns to be exact. Across the 500 subjects in the study, three specific profiles of adaptation emerged. Nearly every athlete in the study could be categorized in one of these three groups. Thus, we see that the athlete adaptation profiles were born.

What follows is a brief description of the three groups of adapters, or the three adaptation profiles. You will also find a chart, as found in Dr. Bondarchuk’s newest title Soviet Methods: A detailed look inside the World’s Greatest System. This chart is typical of the way in which Dr. B presents his training methods and the way in which athletes react (adapt) to them in his four adaptation books. These books have become known, somewhat notoriously, as difficult to read. For this purpose, explanation of how to digest them is provided.

Group 2 – Initially experience a decrease of results by 3-5%, followed by steady

increase of 10% by the time the athlete reaches sports form.

Group 3 – Initial Slow and continual increase of results by 8-10% by the time the athlete reaches sports form. 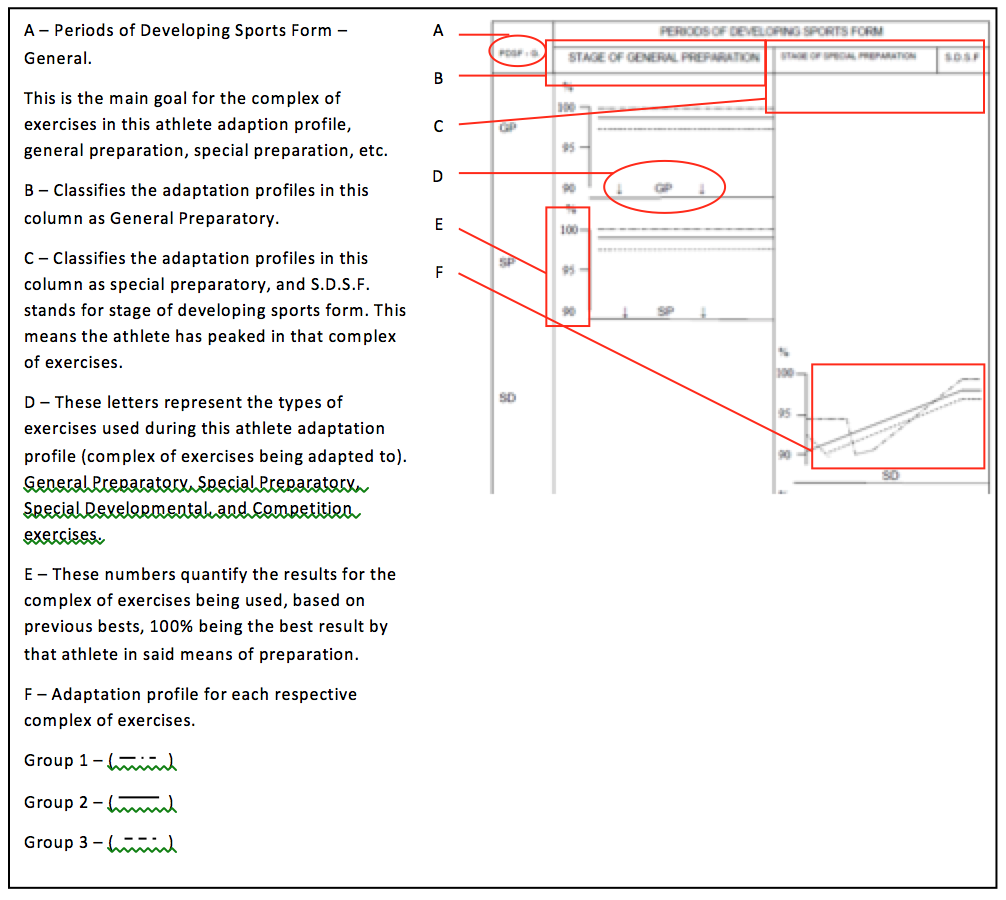 The reader will find many interesting, albeit difficult to understand, examples of these profiles being laid out in Dr. Bondarchuk’s Periodization of Training In Sports. Vol. 1-4. As you will recall from article two in this series on Transfer of Training, I mentioned that adaptation was determined from statistical and subjective observations on the part of the researchers, which consisted of Dr. Bondarchuk himself and other Doctors of Pedagogy who worked in sport. Upon extrapolating the data collected from these athletes and compiling observations made by researchers the three adaptation profiles emerged.

I discussed these three profiles with Dr. Bondarchuk in preparation for this article. Jeff Moyer (owner of DC Sports Performance in Pittsburgh) had asked me how Dr. B would adjust his periodization for athletes, based on which adaptation profile they belonged to. His answer to Jeff’s question is a good addition to this article. The discussion I had with Dr. Bondarchuk on this subject can be summed up thusly;

This is the way in which Dr. Bondarchuk would adjust his periodization approach once he had established the profile of the athlete.

My take-away from this discussion was somewhat pedestrian. I was surprised at how simply it is applied. Some athletes take longer to reach their potential in a set of exercises, so if you are constantly cutting that time short by switching it up, you’re not allowing them to grow maximally. Simply giving athletes who adapt slower more time will allow them to reach peak condition. This makes sense in the conduit of the Bondarchuk system as well. His periodization models revolve around the system of exercises being used, not waving volume and intensity. When one period of training ends, it’s marked by a complete replacement of exercises into the next cycle. No exercises are repeated. Thus, models such as the variation method for example, require more sessions than say, the complex method, due to the sheer number of exercises being higher. The more exercises in a block of training, the more sessions are required to adapt, meaning that Group 3 athletes will need extra time to reach peak condition as compared to Group 1 and 2 athletes.

I hope that this essay has supplied you with a deeper understanding of the Bondarchuk system and his Transfer of Training philosophy. I mentioned several of his periodization schemes in this article and I think it may be confusing to some who are not familiar with this more obscure area of Dr. B’s coaching philosophy. For this reason, the fourth and final installment of this series will cover all things periodization in the Bondarchuk system.

Check out the previous installments of this series: Exercise Classification, Transfer of Training, Athlete Adaptation Profiles. Right off the bat, I want to make the reader aware of …

Making Sense of Bondarchuk-Transfer of Training

In my previous article, which can be found here, I gave a brief overview of exercise classification. The next principle that often comes up in …

By Chad Wesley Smith The other day I read a great article by G. Martin Bingisser, a national champion hammer thrower from Switzerland, regarding the training …

Often a criticism that Dr. Bondarchuk’s books get is that they are too theoretical to understand. Application becomes impossible because the content is too “esoteric”, …

In his article “The Pyramid Of Strength”, Juggernaut-In-Chief Chad Smith discusses the importance of understanding a strength athlete’s level of qualification in determining the most …

Jon Gilmer, Academy Of Speed Director of Speed, Power and Agility USATF Level 1 Certified There is no shortage of information when it comes to speed development for …

Being a coach for either strength or functional fitness athletes can be both extremely rewarding and incredibly frustrating. In sports like weightlifting, powerlifting, and CrossFit, …