Chad Wesley Smith recently asked me what is one thing I would do differently if I could go back to the beginning of my strongman career and start over. The answer that came to mind very quickly was that I would of planned things out better, and set my goals more clearly.  When I started my strongman career I knew my goal was and still is to win the World’s Strongest Man Contest. I didn’t care how I got there as long as I got there. So I set out on the journey to reach that goal. The only problem was that I didn’t have a map. Its tough to get where you are trying to go if you don’t know how you are going to get there.

My only plan of attack was to train as hard as I could and enter every contest I could until I reached World’s Strongest Man. I didn’t have any appreciation for short term goals, I was too impatient for that. I wanted everything right away. Because of this thought process I entered some contests that I wasn’t ready for and had no business entering. I had no nutrition or supplementation plan, no legitimate training plan, and no short term lifting goals. Now you might say that I did pretty well with this plan, but perhaps I did well in spite of it not because of it. Now That I have started to incorporate more preparation and planning and understand the importance of setting goals, over the past few years I have had a rebirth in my strongman career, qualified twice more for the worlds strongest man and became stronger than I have ever been. I have also found success in other avenues of life, including writing my E-book The Cube Method for Strongman, and started my own supplement company. All because I have realized the importance of setting up a real plan for reaching goals.

Most people who are involved with sports or training in general have specific goals that they want to hit. It never seems to be a problem deciding on what the goal is, but rather, the problem is in the actual reaching of the goal. I believe people don’t always reach their goals because they simply fail to lay out an actual plan for getting there. The old adage of those who fail to plan, plan to fail is very true. I believe there are 6 steps that can help you reach any goal you have. I call it the B.A.D A.S.S Method.

Believe– that you can reach whatever goal you set for yourself. If you are going to achieve any goal be it a new deadlift max, winning a competition, gaining or losing weight, you must believe that you can. There is no other option. If you fail at this step there is no step 2. Believing in yourself is what will lead to the next two steps.

Actions-Take the necessary actions to reach that goal. Its not enough to say this is my goal, you must next get to work on the very steps that will lead to it. If I wanted to walk from Texas to New York I would have to actually take a first step. The first actions should be writing down your goal. Then break down that big goal into smaller goals, and then make a plan necessary to reach each small goal. Studies show that you are significantly more likely to reach a goal by writing it down. Once you have your goals and plan written down its time to start implementing the plan and take action.

Discipline– Its not enough to write down a goal and do the actions once or twice, you must have self discipline to continue those actions over and over again until the goal is reached. Self discipline has been described as the ability to force ones self to do something even when you don’t want to. That means preparing that food, not missing your training, doing your stretching and myofascial release even when you don’t want to. No one has ever reached any great goal without self discipline. It is perhaps the single most common attribute of successful people. 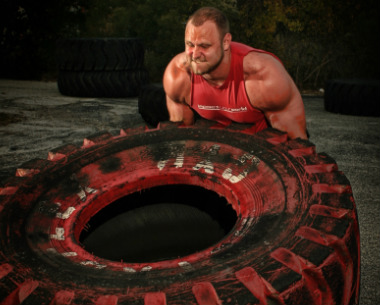 Get The Cube Method for Strongman

Now with these three steps alone I believe you can achieve alot and go far. But I believe there are still 3 more steps that can be taken. That’s right its the A.S.S portion of B.A.D A.S.S.

Assess-Once you have taken the actions and maintained discipline for a good amount of time you should step back and assess what is working and what isn’t. This doesn’t mean try a nutrition or training program for a week or 2 and declare that it does or doesn’t work. It means really giving something a shot and then taking a step back and see where you are at. Everybody is different and even on the Cube Method for Strongman I know some things will work for some and not for others. The goal is to identify those things for yourself.

Simplify-Now that you have assessed what is working and what isn’t its time to trim the fat. This doesn’t mean make things easier, or do less, it simply means cut out what isn’t working to reach your goal and replace it with more of what is. Not everything is going to help and through trial and error you will learn how to streamline your plan in order to reach your goal.

Stay the course– If you want to reach your goal you must sell out to it. When things get tough and life gets in the way, or you have some failures despite following all of the other steps, you have to pick yourself up and soldier on. This is why belief is the very first step. If you believe in yourself you will press on and ultimately reach that goal that you knew you could. In my own life I believe in myself because I believe in the one who created me. It is in that belief that I find my strength to press on.

Be honest with yourself about if you are really taking all of the steps to reach your goals. If not I believe you can follow these steps and be well on your way to reaching B.A.D A.S.S goals.

Josh Thigpen is one of the top professional strongmen in America and is a 3 time ESPN Worlds strongest man competitor. His career has spanned 11 years with 7 as a pro. He has competed in over 50 competitions in countries all over the world. Josh is the author of the revolutionary training system The Cube Method for Strongman. In addition to this Josh is owner and CEO of Conquest Nutrition, a sports supplement company. Josh is a sought after public speaker where he has used his athletic platform to speak to over a million people world wide with an inspiring message.
Website, Facebook, YouTube, Twitter

The Sport Psychology of Goal-Setting

You've gotta set goals and achieve them to become the best athlete you can be. Duh, everyone knows that. And you know what? It's completely …

Goal-Setting: The First Step to Success

Goal-setting is the first step in creating your success. Everyone, even kids, dream of what it would be like to be at the top of his/her profession: …

Setting up for a Huge Squat

Getting set up for the squat is like building the foundation of a house. It needs to be stable and secure to create something great. …