Oh yes…yes I did.  I went there.  And I just called your ass out.

Energy systems training, or “conditioning” as many people call it, is a subject that seems to be more misunderstood than a 15 year old emo kid with Southern Baptist parents.

In the 80’s and 90’s, step aerobics classes, Jazzercise, and “sweatin’ to the oldies” with Richard Simmons were all the rage.   Women everywhere strapped on their thong leotards and legwarmers and got their sweat on daily for 60-90 minutes.  Anything and everything associated with the words “aerobics” was IN.

Then somewhere in the late 90’s to early 2000’s, it seems that the fitness community stumbled upon this new, amazing trend called “high intensity interval training” or (HIIT) as most of us know it, and all of sudden, “aerobics” AND anything associated with the word “aerobic” was demonized.

Misinterpretations of the TABATA study had everyone convinced that all you need is 4 minutes of HIIT intervals and you were good to go.  We were convinced that it was the best for fat loss, it was great for your conditioning levels, and you definitely didn’t need any of that long, slow aerobic bull you used to do.

In fact, anyone doing any conditioning work for more than 10-20 minutes was considered a silly hamster trudging along on their wheel, getting little to no benefit, while all of the super smart, awesome, in-the-know people were done with their workouts in no time.  How do I know this?  Because I totally felt this way and remember having these exact conversations with my “fitness expert friends.”

For years, it was thought that the alactic system would kick in for the first 30 seconds of intense work, then the glycolytic system would take over the for next 90 seconds, and anything longer than 2 minutes was using the oxidative/aerobic energy system. In fact, this is exactly what I thought until I watched two of my friends and colleagues present on energy systems training.  The first was Joel Jamieson‘s presentation on energy systems at the Midwest Performance Enhancement Seminar, and Eric Oetter presenting on energy systems at the Diagnosis Fitness Seminar.  You may have heard of Joel and his website, 8weeksout.com.  If you haven’t heard of Eric yet, just give it a couple of years.  You will.

As Joel and Eric discussed, more current research shows that all three energy systems actually start at the exact same time (the onset of activity), but they simply contribute to energy production at different levels based on the duration of the activity, the length of the recovery period, and the number of bouts of activity.

For example, a 1999 study by Parolin et al., had subjects sprint (cycle) for three 30 second bouts, followed by a four minute rest period.  The graph below shows that the predominant energy system used for the bouts of sprinting, changes wildly from sprint 1 (graph A) to sprint 3 (graph B).

To give you another example of the decrease in the contribution from the lactic energy system with repeated bouts of intervals, below is a graph from an article on Joel Jamieson’s website entitled, Research Review: Energy Systems, Interval Training, & RSA, written by Eric Oetter, who was mentioned above. 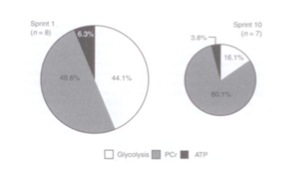 This graph displays the results of a study conducted where researchers asked the subjects to perform 10 six-second intervals with a 30-second recovery period.  The results from the first sprint are represented in the pie chart on the left, and then tenth sprint on the right.  Between the first sprint, and the tenth, you can see the huge decrease in the energy production by the lactic energy system that I mentioned above, and the large increase in the energy production from the alactic energy system, namely creatine phosphate (PCr).

So what about the aerobic/oxidative energy system?  I’ve been discussing it a lot.  How does it come into play, you might wonder…

Considering that many of you reading this website compete in powerlifting, strongman, football, weightlifting, or other sports that require you to exert a high amount of energy over a short time period, with incomplete recovery, hopefully you can see that having a relatively well-developed oxidative energy system is beneficial to maintaining your power output.

***Obviously you don’t always train this way, but many training programs, including The Juggernaut Method 2.0 call for shorter rest periods and training with incomplete recovery.

Of course, as we all know, our body is constantly competing for resources and the last thing you want to do is devote the majority of your time to steady state aerobic training, and that is not at all what I am suggesting.  What I *am* suggesting, however, is to spending some time building a solid aerobic/oxidative energy system foundation, and then simply do enough to maintain that foundation over time.

One thing to keep in mind, is that the aerobic/oxidative energy system foundation that you require to excel in your sport/activity, is in direct correlation to the type of sport/activity you compete in.  Clearly, an ultra-marathoner or competitive cyclist would need a much better aerobic foundation than a powerlifter or olympic lifter, whereas someone competing in CrossFit would fall somewhere in between.

Depending on what your aerobic base looks like when you start developing this foundation, most people can get to where they want to be in about 6-8 weeks, as long as their efforts are consistent.

A great time to focus on developing this base would be: after a powerlifting or strongman competition, when you know your next competition is 5-6 months away, or immediately post-season if you are a football player or other seasonal athlete.

Competitors in sports like powerlifting and weightlifting, which don’t have a significant aerobic component to their competitions, still will benefit from including aerobic capacity work into their training. Aerobic based training will raise the athlete’s general work capacity, allowing them to perform more high quality work within a training session. Improved aerobic capacity will also help strength/power athletes recover faster between intensive training sessions. Finally, improved general fitness through aerobic capacity development will help you perform at a higher level during lengthy competitions, like when you are getting on the platform for a 3rd attempt deadlift during an 8 hour powerlifting meet.

Now I am not suggesting that you spend 6-8 weeks doing strictly distance running (blech!) or other slow cardio, or completely slacking off on your strength training; but every athlete can benefit from taking planned periods of time away from training intensely for their specific sport, especially after intense competition.  Athletes need to take time to repair and heal their bodies, so they can come back stronger and more prepared for their next competition/competitive season.

In Part 2 of this article, I am going outline:

Molly Galbraith is a rapidly rising young trainer who is quickly making a name for herself in the fitness industry.  She is a strength coach and co-­‐owner of J&M Strength and Conditioning, a rapidly expanding, private studio gym in Lexington, Kentucky that’s quickly becoming the go-­‐to place for professional athletes and the general public alike. In less than 18 months, they have gone from renting space at a local gym, to opening their own 7,500 sq. foot facility.
Molly is also co-founder of the wildly popular Girls Gone Strong group, a movement dedicated to changing the way women train. She has also been an expert contributor to magazines like Oxygen and Experience Life.   No stranger to the gym herself, she has competed in both figure and powerlifting and boasts a 275 lb. squat, a 165 lb. bench press, and a 341 lb. deadlift.
Website, Facebook, YouTube, Twitter, Her Butt’s Twitter

As a strength coach in the NFL, I have worked in several philosophically different weight rooms.  Most of my time has been spent in the …

Of Strength And Stereotypy: Training the Autism Population

by Eric Chessen If I wanted to be a jerk about it, I could claim the title of “America’s Most Hardcore Trainer.” Sure, the powerlifting, linebacker, …

4 Ways To Make Any Program Work

There is constant debate about what program is best, Cube Method, Westside, Juggernaut Method, 5/3/1, the list goes on. All of these programs have their …

Conditioning: How To Do It Right

In part 1 of this article, I gave a very brief introduction to energy systems, and discussed why I believe it’s important for powerlifters, strongman …

Conditioning tests are a standard practice at NFL, College and High School football training camps and are for the most part poorly designed. Many of …